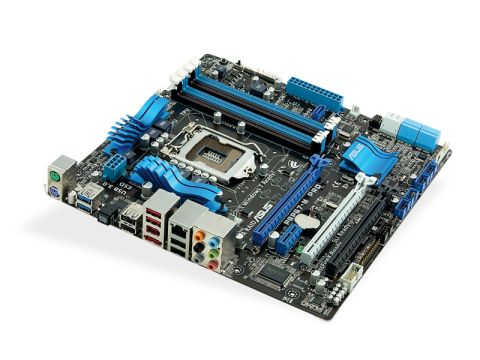 Riffing on the 'small, but perfectly formed' design ethos, Asus P8P67M-Pro is packing a lot into its teeny, tiny footprint.

If you cast your mind back a few years, micro-ATX (mATX) boards were seen very much as the poor relations of the motherboard world, they didn't support the latest processors or chipset technologies and weren't exactly over blessed in the features department, either.

They were usually seen as a bit of an afterthought option to allow people to build small-scale PCs where performance came very low down on the list of priorities.

One look at the P8P67M-Pro from Asus though shows exactly where the small format motherboard is now in the consumers', and more importantly the manufacturers', consciousness.

Not only does it support Intel's latest Sandy Bridge technology – Intel's LGA 1155 Core i7, Core i5 and Core i3 processors and the P67 Express chipset – it also backs these up with four DDR3 memory slots and a whole host of features normally associated with its full-sized siblings.

And all this despite the obvious compromises that have to be made because of its small sized PCB.