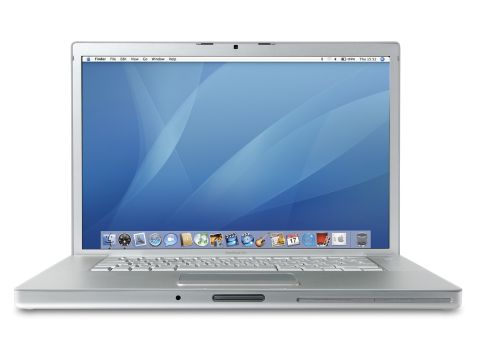 So much power never looked so good.

A solid refresh of the existing line but not a compelling upgrade for those who already own.

Apple's leading laptop has been upgraded to keep it on its toes. Prices have come down, processors and memory have been boosted, and features previously only available on the top-end 17-inch model now extend across the range. The result is an even more formidable MacBook Pro.

Since its launch at the beginning of 2005, this has been the Mac laptop to own for the creative professional. Sure, the smaller MacBook can run the same chunky applications without much bother, and it shares many key specs, but the MacBook Pro's graphics ability and faster processors lets it stride away from its stablemate.

We see every new Mac, but somehow Apple still manages to give us that giddy feeling of anticipation when the box arrives. This is particularly true for laptops, because they hold Macs you can take anywhere and are more desirable than desktops somehow. And, of course, we are itching to test it out.

You could fill a library with the amount of research the Mac community has put into documenting the performance improvements of the new chips. Of course, fuelling that effort is the ever present, but ultimately futile question about whether now is the right time to upgrade. There's no answer to that one. Just buy what you can afford and try not to notice what comes out next week.

The general consensus is that while the clock speeds of the new chips are only incrementally faster than the old chips, the flatter, wider design of the Core 2 Duo offers a leap up in graphics-rendering possibilities. Our benchmarking revealed this to be true. Basic file browsing is not massively faster, but for processor intensive jobs, the improvement is around 15%, which makes a difference.

Note that the Core 2 Duo chip offers full support for 64-bit software. This is important, because Apple's next operating system, Leopard, which is due for release early in 2007, is its first true 64-bit OS. So quite aside from speed improvements that can be felt today, this MacBook Pro will be able to squeeze more out of Leopard in the future... certainly more than the older Core Duo machines it replaces.

This may become a compelling reason to upgrade when Leopard is released. But the plot thickens further, because chip speeds are only half the story here. Apple still needs to improve the circuitry around the chip. At the moment the Core 2 Duos, while headline grabbing, need a better Front Side Bus to feed them than the one currently in the MacBook Pro.

Knowing Apple, it wouldn't surprise us if the new operating system and another new MacBook Pro with an improved motherboard were launched on the same day. Then we would see more dramatic improvements, and that would be the time to upgrade. This could be as early as January at the Macworld Expo in San Francisco. We will see.

Anyway, you can talk about chips until you are blue in the face. The other new changes are thankfully more straightforward to ponder. First, memory has improved, both for RAM and hard drives. The 15.4-inch 2.16GHz MacBook Pro now has 1GB RAM as standard while the 15.4- and 17-inch 2.33GHz MacBook Pros have a whopping 2GB as standard. All have the option of upgrading to 3GB.

The new RAM means the laptops can run professional apps like Final Cut Pro or Shake even more fluently. The hard drives have also been increased in size. The 15.4-inch models now have a 120GB drive each, while the 17-inch gets a 160GB version. All can be configured with 160GB drives, or bigger but slower 200GB drives.

Another hardware change is the availability of FireWire 800 ports on all MacBook Pros. This was previously a feature only available with the 17-inch model. These ports are an upgrade over both FireWire 400 and USB 2.0, with faster speeds for transferring data to and from external hard drives, though not all external drives come with FireWire 800 ports themselves.

The optical drives have been upgraded, too. These are now double-layer SuperDrives, meaning you can write data to a compatible double-layered DVD disc, plus they write at the new, faster speed of 6x for the 15.4-inch MacBook Pros and 8x for the 17-inch. This speed change was particularly needed, as we felt the previous 4x drives in the older MacBook Pros fell short of expectations.

Battery life is about the same as before. Our standard test is to run DVD footage on one full charge until the battery conks out. When we allowed Mac OS X to reduce the brightness slightly, we got just under 3 hours, 30 minutes from one full charge, which is the same as the previous 15.4-inch MacBook Pro. At full brightness this falls to 2 hours, 52 minutes.

How long one charge will last depends on what you are doing with the Mac. We know that Intel Core 2 Duo chips are more energy efficient that the Core Duo, but the faster processing from bigger hard drives, more RAM and faster optical drives all drain power, and in the end the advantage is lost. Apple claims 5 hours and 30 minutes' use from one charge. Presumably that's accurate for just turning the MacBook Pro on, standing back and admiring it.

The display is also unchanged. It's a stunningly bright, 1,440x900-resolution display with wide viewing angle, no dithering at the edges, and excellent colour and contrast. The keyboard has backlit keys, with large embedded speakers off to the sides and a two-finger smart scroll pad that works well. One final note on hardware is that the indicator light next to the built-in iSight camera has retreated into the bezel. The indicator is still there, but now there's nothing to spoil the view when it's not active. It's a great little design touch from Apple.

So, if you're looking for a new Apple laptop, is now the time to buy? We think that depends on your situation. If you already own a MacBook Pro, or even a MacBook, and are thinking of an upgrade, we suggest holding on until after the January Macworld Expo. Last year Apple updated the MacBook Pro twice in six weeks, and we have a feeling this time frame might repeat itself.

However, if you are new to Mac notebooks, then this one is a more sensible purchase; you will be ready for OS X 10.5 Leopard, have a very fast machine on your hands, and the fastest mobile Mac OS workstation ever. And you can experience that giddy feeling you only get when you own a Mac for the first time.