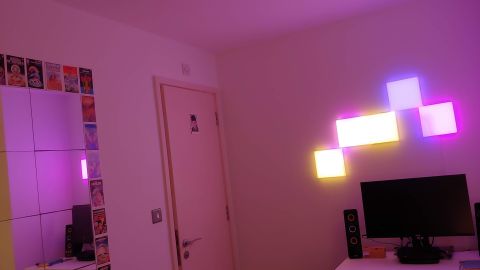 If you can persevere through a frustrating set-up and installation process, the LIFX Tile kit is about as attractive a smart lighting system as we’ve yet found.

Do you remember when the big trend in home decorating was a ‘statement’ wall? One big bold color splash that broke up the monotony of crisp-yet-asylum-like plain white walls? The LIFX lighting range could be considered as serving a similar purpose for the connected age. Where Philips and other smart lighting companies are focussed on bulbs and lighting from a mostly utilitarian perspective, the LIFX range includes products that treat smart lighting as an artwork.

Whereas the LIFX Beam could be used to accent features around your home, the LIFX Tile on the other hand could be seen as a customisable artwork all on its own.

If you’re looking to spice up a barren corner of your home, the voice-assistant compatible LIFX Tile will be a great addition to your connected home... with a few set-up concessions.

In terms of competition, the closest similar device would be the Nanoleaf Canvas. It’s also modular and wall mounted, with variable pricing around the globe: $249.99 in the US, £179.99 in the UK and AU$319.

A LIFX Tile pack consists of five color-changing tiled panels, which affix to your wall using sticky (yet easy to remove without damaging your surfaces) Command Strip adhesive pads. Each tile measures 7.87 x 7.87 x 1.37, and the tiles can be placed in any way you like along your wall, only restricted by the length of their power cables – the main one leading to a power socket measures 2 metres, while the connecting cables that link each individual tile together are 0.4m in length.

That’s more than enough cabling to create interesting patterns on your wall, but remember that if you don’t sit the tiles side-by-side you’ll have visible white cabling between each square. Each Tile does have a cable tidy area around the back of each panel, but it’s incredibly tricky to keep them tucked away into place while attaching them to your wall. As a result, you may give up on some of your more adventurous tiling patterns.

That said, it’s more flexible in terms of potential placements than the contact-point-powered LIFX Beam, but more prone to frustrate, too. LIFX recommends you don’t put the Tiles on the ceiling either – they’re light, and the Command Strips are sticky, but it wouldn’t want you to risk them falling on your head.

You can turn on the LIFX Tile and use it as a regular lighting array just by plugging it into the wall and flipping the switch, but to take advantage of the connected and color changing features, you’re going to have to get it online with the LIFX app for iOS and Android.

This, as with the LIFX Beam, proved a little difficult. It’s not that the process is complicated – you simply plug in the Tile kit, open the app, and link the two devices up over your Wi-Fi connection. But the Tile regularly couldn’t be identified, and even when it was, it took a few attempts before the set-up process would complete without the Tile confusing what it needed to connect to. Note also that only the 2.4Ghz band b/g/n connection is supported, with the 5Ghz band not supported.

It’s a far from a seamless installation then – but the memories of the struggle melt away once you’ve got the LIFX Tile up and running.

The LIFX Tile is a feature-rich lighting system. Each of the five panels is divided into 64 zones, and each of those can be programmed to display one of 16 million different colors.

As well as brightness and color temperature, the LIFX app gives you dozens of ways to set up the colors of your choosing. You can literally paint the tiles in the app the specific shades you want (the app makes the individual tile flash before painting so you know which one you’re editing), scroll through a list of preset themes, and decide whether or not the colors are solid blocks or blend into each other. You could tinker with them for hours to get the perfect combination to suit your needs, so thankfully there’s the option to save the ‘Scenes’ you've created.

Once you’ve got the shades and hues to your liking, you can then apply different effects to the lights. They vary in usefulness and comfort, from a flickering candle to a strobe light. There’s a few good party option, the strobe included, and we’re particularly fond of the music visualizer, which syncs lighting pulses and patterns with the audio picked up by your phone’s microphone.

As announced at CES 2019, the LIFX Tile will soon be getting a feature that will allow you to tap the lights in order to cycle through different colors and lighting modes. It does this by activating a so-far dormant accelerometer in each unit. The update’s yet to roll out yet, so we’ll withhold judgement on that feature for a little while yet. But it’s good to see LIFX’s continued commitment to its products post-launch.

The LIFX Tile can be put into groups with other LIFX Tile products, as well as other smart lighting products from other brands, thanks to integration with smart assistant and smart home services from Amazon, Apple and Google.

Whether you’re using Amazon Alexa, Apple’s HomeKit devices with Siri or Google Assistant, you’ll be able to talk to the Tile to change its colors, power status and more. Using these services, the LIFX Tile can also be used as part of a routine – say, giving an Alexa command that turns the Tile on, fires up your favourite playlist and switches your TV on.

There’s also a function to program a day and night cycle for the LIFX Tile too, with different brightness intensities and wake up times laid out throughout the day. It’s a nice feature if you decide to place the LIFX Tile in a bedroom – there’s more to it than just night time ‘mood lighting’...

For the most part (and installation aside), the LIFX Tile works superbly. There’s the odd occasion where an Amazon Alexa command would go unrecognised, or the light would lose connection with our router, but for the most part it remained stable and accessible at any moment of the day.

Though we wouldn’t suggest using the LIFX Tile as a sole primary light source for a room, it can get pretty bright if required, with each tile maxing out at a peak 34 watts. In combination that’s enough to give a room a healthy glow, and with some creative color painting can drastically change the feel and mood a room if you’ve the patience to program it accordingly.

If you can struggle through the fiddly set-up process, the LIFX Tile is a lovely addition to a smart home in need of a splash of color.

Complimented by a full suite of customisable color option, support for all the major smart home ecosystems and with new features still to be rolled out, it’s a flexible device that can make for a lovely centrepiece in a home.

It’s quite pricey in comparison to some smart lighting kits, but if you evaluate it in terms of an interior decorating device as opposed to a simply a gadget, it’s actually quite competitively priced – particularly given that you can program it to behave in numerous ways to fit any decor.