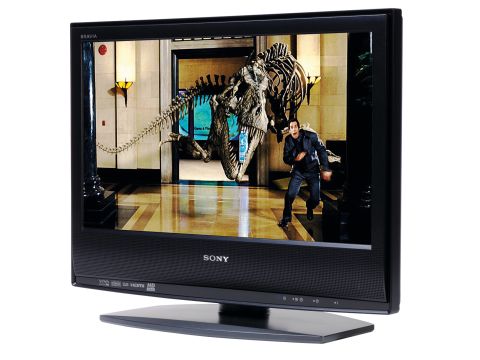 The KDL-20S2030 is stylish in an understated sort of way

Expensive, but great pictures and plenty of sockets make it worth the asking price

This 20in LCD set from Sony is one of an increasing number to boast HD-ready specs, which means you can get crisp hi-def pictures in the bedroom, kitchen or anywhere you like.

To make this possible, the KDL-20S2030 boasts a widescreen resolution of 1366 x 768 plus an HDMI that can accept 1080i and 720p pictures. This is joined on the rear panel by component video jacks, which also supports hi-def, two RGB-capable Scarts for your standard-def kit, and a PC VGA input.

The KDL-20S2030 is stylish in a understated sort of way, with a smart black and grey colour scheme but no eye-catching embellishments. The styling works well, but if it doesn’t appeal to your aesthetic sensibilities then check out the light silver version, KDL-20S2020.

Inside the set is a generous array of useful features, most of which are picture and sound tweaks. On the visual side, there are two picture presets and a user-defined setting, which allows contrast, colour, sharpness and brightness, plus noise reduction, to be altered. For audio, there’s a choice of BBE ViVA, which lends a 3D effect to stereo sound, and Dolby Virtual.

The other main feature is a digital TV tuner with a seven-day EPG, and access to digital text and interactive services. If it’s hard numbers you’re after, try these for size: 8ms response time, 1,200:1 contrast ratio and a 178° viewing angle. Impressive.

Sony also nails the menu system, which is small, intuitive and intelligently laid out. The remote has an ergonomic shape and a terrific button arrangement.

Yet it’s performance is where the KDL-20S2030 really excels. Hi-def material looks crisp and pristine, as demonstrated by coverage of Wimbledon on BBC HD. Shots taken from the back row of centre court are filled with hundreds of seats, all perfectly reproduced by the KDL-20S2030’s competent one-chip video processing.

During play, you can make out patches of worn-down grass and facial features on individual members of the crowd. Many people think that 20in is too small to make the most of hi-def, but the Sony’s superb performance proves otherwise, with a very noticeable jump in quality from standard-def pictures.

Also astonishing is the set’s colour reproduction with standard and hi-def pictures, lavishing Centre Court with the sort of rich, realistic greens that almost make you want to reach out and stroke the screen. Much of this is down to the impressive black level, which anchors the picture with plenty of depth and density.

We’re also amazed at the set’s ability to display a moving tennis ball with minimal lag, given the speed at Venus Williams belts the ball around the court.

Our only criticism of the KDL-20S2030 is the smidgen of noise occasionally seen in large patches of colour if you look for it.

Minor blips like this aside, Sony’s impressive KDL-20S2030 is a magnificent 20in TV that is worth every penny of its relatively high price. One you simply must shortlist if you’re after a smaller set – and don’t forget to give it an HD source!