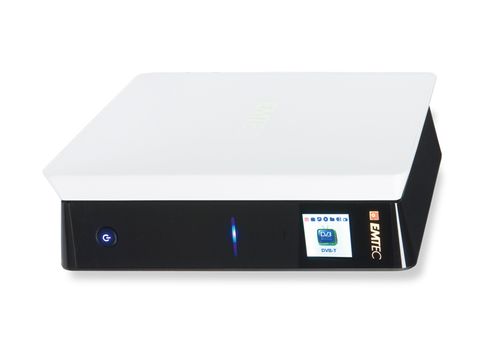 The Movie Cube has quite a distinct look to it

The Movie Cube is a little rough around the edges and a bit expensive. The PVR capabilities are no match for a good Freeview+ box, but it's still useful as a back-up hard disc and a capable media server

The Emtec S800 HDD Movie Cube combines much of the functionality of a DTT/analogue tuner-equipped DVD/HDD recorder (minus the disc part, of course) with an HD-capable media streamer, while also throwing video capture into the mix.

It comes with a 500GB hard disc installed that can be swapped for another 3.5in drive. It will also work with USB-attached flash sticks or external drives and can function as a back-up hard disc.

Its looks are very French (we prefer it standing vertical) and it's not actually a cube, although we do like the colour LCD display.

The rear panel boasts HDMI and component connectors, but capturing from an external source is strictly composite and phono only aided by the supplied Scart-to-RCA adapter. Data connectors comprise twin female and one male USB 2.0 port.

The flat projector-style remote falls down a bit in terms of button arrangement; playback and navigation buttons are prominent but those you come to rely on frequently – such as 'home' – are rather on the small side.

The Linux-based software is rather tacky-looking but it's generally easy to find what you want.

DTT channels get their own EPG arranged in a slightly unusual fashion.

Channels are listed across the top of the screen – you can view a list of seven-day DVB data for each, skippable day by day with synopses underneath. Because the Cube has a 'hybrid' tuner you cannot record two channels at once or one while watching another.

Scheduling of TV recordings to internal and external drives is handled via the EPG or in a separate timer menu. This also handles recordings from external sources, so if you have it turned on and at the correct channel, you can schedule repeat recordings from a connected receiver.

There are five quality settings and it helps that analogue and especially DTT pictures are reasonably crisp to start with (they look best upscaled to 720p through component or HDMI), although recordings made in LP or below can look predictably blocky on large-screen TVs. The limitations of composite resulted in soft-looking recordings from our Sky+ HD box.

You can watch a recording from the beginning while still in progress and edit it afterwards, including splitting it in two. Timeshifting is possible and you can smoothly fast-forward and rewind up to 32x normal speed.

We had no trouble playing our AVI and Xvid files and MPEG-4 support is touted, although none of our AVC files could be played. Compatibility with subtitle files is a nice bonus. You can also play audio (including MP3s) and image files and create playlists.

There are two networking options – wireless and Ethernet/LAN and you can use the Movie Cube as a network hard disc. It was fiddly to get it running with our Vista-powered machine but video and audio streaming were pretty smooth