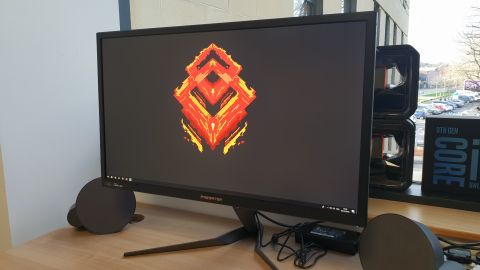 If you absolutely must be at the cutting edge you can’t go wrong with the Acer Predator X27. Its popping color and impressive spec list is a must have for any enthusiast with money to burn.

What are you willing to give to game at the absolute best? That’s the question you’re going to be asking yourself when you’re looking at the Acer Predator X27.

From the get go, we need to clarify that this monitor is obviously not for those into their competitive first person shooter titles. IPS panel, 4MS response time? Pfft get outta here.

The Acer Predator X27 is for gamers dedicated to their AAA games. It’s a panel designed to push boundaries.

...And then there’s the price, and she’s a doozy. We're talking $2000, £2200 and AU$2800. Ouch. It’s a high price to pay, that’s for sure, and we’d usually call this an early adopters tax. But, if we’re honest, these panels have been in development for a long time now, and readily available for the last year. So why the high price tag?

Asus has the ROG Swift PG27UQ, Acer has the Predator X27, and AOC should be launching the AG273UG very soon. The panel found at the core of both the Asus and the Acer models is actually manufactured by AU Optronics directly, and then handed to the two partners to incorporate into their screens.

It’s taken a lot of effort and investment on AU Optronics’ part to develop the original 27-inch panel to begin with, as having near enough 8.3 million pixels refreshing 144 times a second is no small feat.

Couple that with integrated G-Sync support, maintaining a low 4-ms response time, and supporting HDR 10 as well, and you’re talking some serious lab development time. Given AU Optronics are currently the only manufacturers of a panel of this caliber the price is jacked up because of it. Thus the crazy high price points of both the Acer and the Asus screen.

AOC is Philips' gaming brand, however, and they produce their own panels, meaning that the one found in the AG273UG is going to be brand new. Although late to the party, this should bring competition to the market once Philips have recouped their development costs.

However, for the time being, if you’re after a screen with this rap-sheet, you’re just going to have to stomach this huge cost.

So then, let’s talk about the design of the Predator X27. Ultimately, its stunning. It’s exceptionally clean, and the aluminium base, coupled with its rather intuitively-designed rotation mechanism, really does suit it, but then you’d expect as much, as the whole thing tops out at nearly $2000.

At that price, the frame itself needs to be flawless. Of course, if you’ve got monitor arms, you can drop that entirely and instead opt for something a little more serious, thanks to the VESA 100x100 support, but otherwise it absolutely looks the part.

You do have to put up with a bit of a bezel (both here and on the Asus, again due to the panel used), but it’s not too distracting, and Acer has included as standard deflecting light panels, typically found on designer screens, to ensure you’re getting the absolute perfect color temperature that's unaffected by any unnatural or natural sources of light.

On top of that you’ve also got 3.5mm jack, three USB 3.0 with a USB 3.0 input, meaning you can use this as a fairly nice hub to connect all your peripherals into.

For video, you’re graced with one DisplayPort 1.4, and one HDMI 2.0. There’s not a huge amount of connectivity here, but the reality is there’s very little that can actually drive the display anyway. This is for the PC gaming elite, consoles be warned.

This ultimately leads us to what you’re going to need to power it. The brutal truth is that you should expect to spend at least the same again, purely on your GPU solution, if you want to get anywhere near that 144 Hz frame rate at 4K, and even then, you might struggle.

It’s a panel designed for the future, for early adopters who are awaiting Nvidia and AMD to really bring 4K gaming to the masses. Is it a waste of money then? Not entirely. The desktop experience is like nothing we’ve ever seen, and with a single RTX 2080 Ti, in less graphically intense titles (here’s looking at you World of Warcraft), you can easily hit 100 fps.

Overall, the screen performs exceptionally well. The ghosting is minimal (as to be expected), the response time snappy, and overall color representation is exceptional. Even in standard definition mode, blacks are inky (impressive for an IPS panel), and color on the whole is enjoyable. The big one though is HDR, and boy, is that something to behold.

Although there aren’t a whole ton of games out there right now that take advantage of that wider color-spectrum, the ones that do look immaculate. On top of that, enjoying media from the likes of YouTube and Netflix is a joy as well.

Outside of pricey OLED TVs, nothing really compares to it. Side-by-side next to a fairly high caliber 32-inch IPS 4K display from Viewsonic, the HDR mode of the AU Optronics panel runs rings around it. Everything seems more alive, and it almost gives it a surreal 3D feel to it, as if could almost touch it. The line between pixel and man is certainly fading.

So how do you justify a panel quite like this? Well, honestly we’re not sure. It’s a beast.

If you must have the absolute best of the best, there’s no question, the Acer Predator X27 really does push the boundary of PC entertainment right now.

However, the investment on the whole is just insane. Bear in mind that you'll need two $1400 GPUs to even max it out effectively in most AAA titles, and that prices may drop dramatically over the next few years. This makes it a bit of an odd one to recommend.

Pay for it now and enjoy it? Sure, you could do that. Wait a year or two, and see both GPUs and screens like this drop and value by almost 50%? The latter may just be worth waiting for.