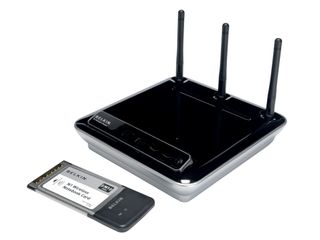 Some 83.4 per cent of respondents voted in favour of the new, more stable draft

The next-generation 802.11n wireless standard has taken a huge step towards becoming finalised. When everything has been agreed upon, 802.11n will provide hugely faster wireless speeds over a far greater range than the previous 802.11g standard.

Most of the main specifications for IEEE 802.11n have been in place for some time, but compatibility niggles with different manufacturer's kit have held it back, while throughput speeds have been disappointing. Draft 2.0 is said to have alleviated a lot of the earlier problems.

The deadline for passing comments on draft 2.0 was last Friday. It has since emerged that 83.4 per cent of respondents voted in favour of the new, more stable draft. The required threshold for approval is 75 per cent.

Many of the problems with the previous 802.11n drafts were emphasised when manufacturers didn't wait for draft 1.0 to be finalised before shipping kit featuring the standard. Had it been kept under wraps until it was actually ready, 802.11n might not have received such negative press over recent months.

Draft 2.0 incorporates some technical tweaks as well, including fixes that enable new 802.11n devices to be completely compatible with legacy networks. Draft 2.0 can scan for older devices which can't understand the 40MHz channel used.

In such cases, 20 MHz channels can be used. This results in a minimal performance hit due to the MIMO (Multiple Input, Multiple Output) technology included within 802.11n.

The Wi-Fi Alliance has already said it will be pre-certifying some draft 2.0 kit in advance of the full ratification of 802.11n.