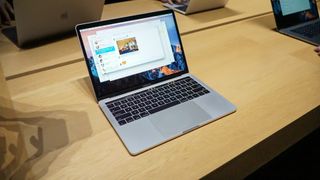 Apple spent a great deal of time showing how the new MacBook Pro was specifically designed for creative professionals, from artists to photographers and videographers, during its launch event last week. However, one thing the tech giant glossed over was the laptop’s omission of the SD card slot.

Unlike the headphone jack funeral held during the iPhone 7 announcement, Apple didn’t spend any time mourning the removal of the SD card slot. This left many to speculate whether the omission of this crucial port was due to Apple’s vision of an all USB-C world. Or, perhaps the laptop was just too thin for it to be integrated.

Well, today, Apple finally broke its silence on the matter. In an interview with The Independent, Apple’s Senior Vice President of Worldwide Marketing Phil Schiller explained the company decided to remove the SD card reader because it’s a nuisance and wireless transfer is good enough.

Here’s the full quote below:

"Because of a couple of things. One, it’s a bit of a cumbersome slot. You've got this thing sticking halfway out. Then there are very fine and fast USB card readers, and then you can use CompactFlash as well as SD. So we could never really resolve this – we picked SD because more consumer cameras have SD but you can only pick one. So, that was a bit of a trade-off. And then more and more cameras are starting to build wireless transfer into the camera. That’s proving very useful. So we think there’s a path forward where you can use a physical adaptor if you want, or do wireless transfer."

I’m sorry, Mr. Schiller, but you are completely wrong.

Because of a couple of reasons. First, Apple is in full control of designing a slot that can eat the entire card or have just a nub stick out on the back of the slot.

Second, CompactFlash was already on its way out and rapidly replaced by SD cards by the time the card reader was first introduced in 2009 with the first 13-inch MacBook Pro. Today, CF cards are rarely used and not found on most camera bodies, except the Canon 5D Mark IV and the Nikon D5.

Finally, while wirelessly transferring photos from cameras has become increasingly easy, transporting images over the air to a computer is more complicated even if it's available on Sony and Canon cameras.

Modern cameras are designed to create their own wireless network to connect to smartphones, but this functionality doesn't extend to computers. Instead, users need to connect both the camera and their laptop to an existing wireless network, a luxury that won't always be available in the field.

What’s more, the images being transferred are often compressed JPEG when creative professionals need to transfer large RAW files. The 42.4MP Sony Alpha A7R Mark II, for example, produces files that are 63MB at a minimum, and the latest Olympus OM-D E-M1 Mark II produces RAW images averaging around 20MP. These files are only bound to get bigger as Medium Format Cameras begin to rise while the APS-C standard rises to 24MP and full-frame sensors regularly go above the 50MP limit.

And that’s just the still photography. The 4K footage and 1080p movies Apple hopes its users will edit with Final Cut Pro X on the Touch Bar can’t be wirelessly transferred to the new MacBook Pros, either.

Some argue that it’s the camera manufacturers that need to adapt to the times and introduce faster data ports than a mini/micro USB 2.0 port. It’s a fair point. I just reviewed the first and only camera to feature USB-C, the OM-D E-M1 Mark II, and it’s baffling it’s taken this long for the new-fangled connector to appear on a camera when it seems like the perfect adopter.

However, one problem with transferring images and video over a wired connection is that it is very power consuming. If you ask any photographer or videographer to choose between burning through a battery to transfer files for 30 minutes or shoot all day, they would all almost pick the latter.

As a photographer and videographer myself, it’s hard to justify the cost of the new MacBook Pro even with its revolutionary Touch Bar. There’s a wide selection of Windows 10-powered machines to choose from that are just if not more powerful than Apple’s latest laptop and equipped with an SD card slot no less.

So honestly, save yourself a lot of grief and get a Surface Book or another production machine today.