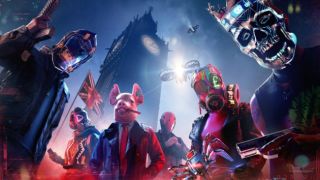 In what it’s calling a world first, the BBC has sent one of its reporters into the world of Watch Dogs: Legion for an interview with the game’s creative director.

On behalf of BBC Click, Marc Cieslak travelled to Ubisoft’s Toronto studio where he went through the motion capture scanning process and was dropped right into Watch Dogs: Legion’s post-Brexit London.

Cieslak was joined in a virtual Piccadilly Circus (with traffic sounds and all) by the game’s creative director, Clint Hocking, to discuss Watch Dogs: Legion and the developer’s thoughts on its setting.

Get your head in the game

Watch Dogs: Legion. In a world first @MarcCieslak interviews the games creative director inside the video game itself.Catch it on TV @BBCBreakfast and @BBCClick. pic.twitter.com/U3FQXiRQGrJanuary 25, 2020

Given Ubisoft’s decision to set Watch Dogs: Legion in a post-Brexit London which has descended into a dystopian surveillance state against which players must fight back, Cieslak was interested to know whether or not the studio is anticipating any backlash as a result of touching on a thorny topic.

Hocking gave a surprisingly straightforward answer, stating that he looks at the matter as “a creator of culture.”

“If we were creating films or movies or books, it’s the same with video games,” he explains, “it’s our responsibility to look at the things that are happening in the world around us and have something to say about that. To create something that’s meaningful, that people can look at and engage with and it speaks to the world that they live in.”

Hocking also points out that Ubisoft has had to think about a lot of topics that are relevant to our present and future and consider whether or not they’re worth touching on in the game, including, but not limited to, drone regulations and self-driving cars.

Other than that, the interview doesn’t reveal much new information about the game or its progress but it is a fun insight into what’s possible with motion capture. Between this surprisingly natural interview—given the cumbersome headgear and studio set-up it requires—and the recent decision to debut a Star Wars trailer in Fortnite we’re seeing increasingly interesting examples of the potential of virtual spaces.

After it was delayed late last year alongside Gods and Monsters and Rainbow Six Quarantine, Watch Dogs: Legion still doesn’t have a firm release date. At the moment, all we know is that it’s been moved into Ubisoft’s next financial year and should be playable sometime before the end of 2020. When it is released, the game is expected on current-get consoles as well as the next generation PS5 and Xbox Series X.