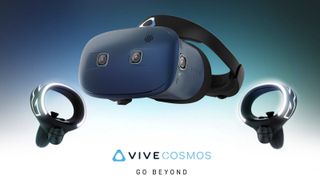 Since HTC announced the Vive Cosmos back at CES this year, we've been eagerly awaiting more news on what VR users can expect from the standalone headset before it launches later this year – but now we're starting to get a clearer picture about what the specs will be.

That part about clearer picture is key: the Vive Cosmos will pack a sharper resolution from previous Vive models.

As reported by RoadtoVR, HTC has confirmed that the Vive Cosmos's LCD display will have a resolution of 1,440 x 1,700 pixels per eye, up from the still-capable 1,080 x 1,200 of the standard HTC Vive – making for an 88% increase in the overall pixel count, essentially doubling the amount of detail onscreen.

Why does that matter? Cramming in more pixels per inch allows for a crisper, more detailed picture during VR games and experiences – crucial when you've shoved a screen right up in front of your face, and low-res imagery becomes somewhat painful to look at. (We're looking at you, Zelda VR.)

All about the movement

In terms of maintaining fluid play and avoiding motion sickness, you'd mainly be concerned about the refresh rate, and the Vive Cosmos will maintain the 90 Hz refresh rate of the HTC Vive.

HTC has also implemented a flip-up design for easy removal, and a 'vented front design' to ensure air flow during long VR sessions.

But resolution itself is going to give some headsets clear advantages over others in the field, as users realise that they don't need to settle for fuzzy images when strapping premium VR kit to their face.

The Cosmos doesn't quite match the 2,160 x 2,160 per eye panels of the HP Reverb, but it's still a sizeable step up from most headsets currently on the market.

Here's hoping manufacturers keep pushing these specs: if VR is the next big creative medium, we're going to need it to look pretty good.