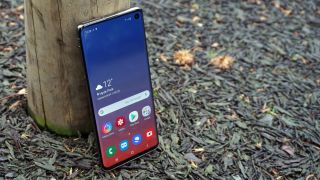 While we’re eagerly awaiting the Samsung Galaxy S20’s launch at the Unpacked event on February 11, we might know the release date for the flagship smartphone thanks to Samsung itself.

Right now, you can go on the Samsung website and reserve one of the new flagship smartphones - and if you do, it tells you to watch for an email to complete the preorder for a March 6 delivery, as SamMobile first spotted.

Here, see for yourself:

Yes, that’s the date in bold. Heck, it’s even in another place on the same reservation confirmation page.

And it only makes sense that the shipping and delivery date is the same as the proper release date, to ensure everyone gets their hands on the flagship phone at the same time. It also matches a leak earlier today that noted the S20 line would "likely be available first Friday of March," which is March 6

Not much to say, is there?

This isn’t a big surprise, given the Samsung Galaxy S10 line’s release and ship dates were on March 8, 2019. It’s a tried-and-true interval for Samsung to drum up interest and preorders to ensure a simultaneous launch.

If anything, this tells us the S20’s release is proceeding apace, and is more evidence that there aren’t too many surprises in store. Sadly, this page doesn’t even hint at which phones could be in the lineup.

The only hiccup might be in the fine print: in a footnote (click “Read More” after the asterisk below your reservation) to see a couple caveats. Most importantly, “Not all Galaxy devices are eligible for this offer” - which could mean that not all of the S20 devices are releasing on the same day. If any of the phones were delayed, we’d expect the S20 Ultra, since its seeming predecessor Samsung Galaxy S10 5G came out months after the rest of its siblings in June 28.

The other caveat, of course: Samsung could change the release date at any time.