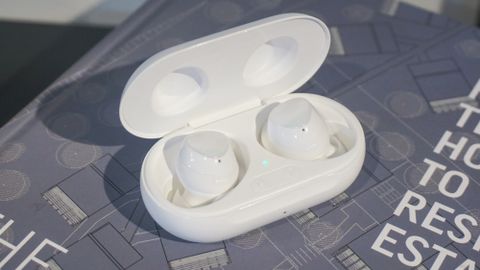 The downside? The new Samsung Galaxy Buds Plus lack high-end audio codecs and higher IPX4 rating that the Apple AirPods Pro have. That's not even mentioning the fact that they don't offer any form of noise reduction / noise cancellation, nor have a built-in voice assistant like other true wireless earbuds out there.

What Samsung has done here, and should be commended for, is creating a competitive pair of true wireless earbuds in an increasingly competitive landscape. They hold up against rival buds in their own price range and while they don't achieve the same heights as, say, the Sony WF-1000XM3 or AirPods Pro, they're significantly cheaper and offer some nice features for Samsung smartphone owners.

At $149.99 / £159 / AU$299, they're about the same price as last year's Samsung Galaxy Buds (depending on your region) and a little cheaper than their biggest competitors, the Apple AirPods. They're also  significantly cheaper than the best true wireless earbuds of 2020, the Sony WF-1000XM3, though these buds come with premium features like active noise cancellation.

Unfortunately, however, neither the Samsung Galaxy Buds Plus nor Apple AirPods Pro support higher-end audio codecs like aptX, aptX Low Latency or, even better, LDAC. For now your only options are SBC and AAC... unless you also use a Samsung smartphone that runs Android 7.0 or later, then you'll also have the option of Samsung's proprietary Scalable Audio codec which offers higher bitrate support and better stability, a handy perk if you've had earbuds drop out on you in the past.

The biggest criticism that we can levy against the Samsung Galaxy Buds Plus is that they don't offer active noise cancellation nor do they provide much in the way of passive noise reduction. That means, if you plan on wearing these out and about, expect to hear a lot of the outside world while listening to your music. That's fine if you're at the gym and don't mind hearing a bit of the background noise or if you're at the office and still want to be able to hear what coworkers are saying nearby, but those looking for total aural isolation will have to look elsewhere.

The good news? If you lose them, you can find them again pretty easily by going into the app and selecting 'Find My Earbuds'. As long as they're still charged, this will get the earbuds to play a chirping sound at increasing volume - which is pretty handy if you're the kind of person who takes out your earbuds and leaves them laying around the house.

So where do the Samsung Galaxy Buds Plus stand in the wide and deep echelon of true wireless earbuds? Well, somewhere in the middle. Thanks to its better battery life of around 11 hours (give or take) per charge, it's a decent pick for people who hate charging their headphones at night. That said, it doesn't feature a built-in virtual assistant nor does it have real water-resistance, it's just IPX2.

Most egregious, however, is its lack of noise cancellation or even noise reduction, a feature that's available on the similarly priced Amazon Echo Buds. Now sure, those may not sound as good as the Galaxy Buds Plus nor do they last as long, but both those features lose their luster when you're struggling to hear your music on a crowded subway train.

At the end of the day, the Samsung Galaxy Buds Plus present a good value for folks who just want true wireless earbuds they don't need to charge everyday. They aren't the best-sounding, but the dual-driver design is a big step up for Samsung, and is good enough for watching videos and listening to bass-lite music.

Ultimately, you'd be better served by saving up for a pair of Apple AirPods Pro if you're an iOS user or a pair of Sony  WF-1000XM3 if you use Android, both of which sound better and offer noise cancellation. They don't last as long as the Galaxy Buds Plus do and cost twice as much, but they're a better all-around pick in our opinion.