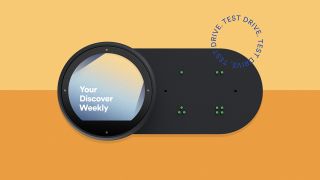 Rumors around a Spotify speaker for your car have been swirling for a while, and it's now official: Spotify has confirmed it's testing a new hardware device that fits in your car, designed to assess "how people listen in" on the go.

As this is still in the testing phase, you can't actually buy the speaker – called Car Thing – at the moment, but it is going to be given to a select number of Premium subscribers in the US.

Details on what Car Thing actually does beyond collect data for Spotify are a little thin on the ground. All Spotify is saying is that it's "a voice-controlled music and podcast device".

In fact, it might never go on sale: Spotify says it's committed to becoming "the world's number one audio platform" rather than making hardware devices.

Even if hardware doesn't become a big part of Spotify's business, future devices may include a Voice Thing and a Home Thing, Spotify says. We're assuming that last one might be a little like a Google Home Mini.

"Americans spend 70 billion hours behind the wheel each year," Spotify's announcement reads. "That’s a lot of time spent on the road. So what you do – and what you listen to – to help you get through those long hours in the car matters."

"That’s why Spotify is trying to learn more about people’s listening habits and preferences to help create an unparalleled experience for our users."

Testing is beginning in the next few weeks, according to The Verge. As the device gets into cars we might start hearing more about what it can actually do.