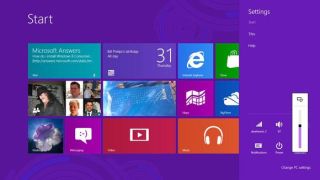 Microsoft co-founder Paul Allen has immersed himself in a full 360 experience with the company's upcoming Windows 8 OS, he wrote in a recent blog post.

Using both a traditional desktop PC and a Samsung 700T tablet (the kind of device for which the OS's touch capabilities are optimized), Allen's learned a thing or two about what W8 does well and where its weak spots are.

Though he called certain aspects of the system "particularly bold and innovative" and dubbed the tablet interface elegant, Allen wrote he encountered some minor issues in his W8 explorations.

What's particularly puzzled him about the OS is that Microsoft has created two "modes" for users - one that's best suited for desktops and one that runs better on slates.

Allen, who spent the majority of his blog post explaining the Windows 8 UI and offering his own tips to users, reminded readers that Windows 8 "simultaneously supports distinct views best suited for both a tablet and a traditional desktop."

Those views can be run on either type of device at any time, even when an application in one mode is already open.

"The bimodal user experience can introduce confusion, especially when two versions of the same application - such as Internet Explorer - can be opened and run simultaneously," Allen wrote.

"Files can also be opened in either of the two available modes," he continued.

"For example, after opening a PDF attachment in Outlook from the desktop, Windows opens the file in Microsoft Reader, an application more suited for use on a tablet, rather than the desktop Acrobat Reader."

Allen noted a manual switch can return an application to desktop mode and outlined a way to change file and program associations in the OS sans switch.

Also among his tips were pointers on installing third-party applications to create a start menu on a system that will now feature an interactive start screen.

Get used to it

Tech bosses from Intel (supposedly) to Dell are weighing in on what exactly the new OS and related products, like the Surface tablet, will or won't bring to the PC table.

It's refreshing to hear an honest opinion about an upcoming product from someone with a personal and financial stake in the company.

While the "Idea Man" highlighted the aspects of Windows 8 users are likely going to find confusing, he made the case for wading through the OS's growing pains.

"You will immediately notice that a number of essential aspects of the Windows user experience have changed for Windows 8," he wrote.

"And while these changes may prove confusing initially, after a short period of discovery most of these changes should quickly become familiar."

Allen's excited for the new OS...are you?