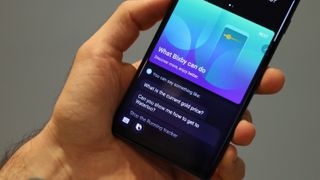 Samsung is rolling out a beta update to its Galaxy Note 9 users, enabling Bixby to work in a whole host of other languages.

Where it was limited to Korean and American English before, the new update will mean Bixby is more relevant to the UK, Germany, Spain, France and Italy.

It’s clear the new update is in beta, but presumably it’ll roll out to all Samsung Bixby users soon. Below is the message we received on our Note 9 unit:

Now you can do so much more. Samsung today announced that its voice assistant, Bixby, is now available as a beta in UK English to Galaxy Note9 users, with other Bixby-enabled devices due to launch in the coming months.

This new Bixby provides a more personal experience for consumers. The update is one of five additional European languages now on offer, including German, Italian, French and Spanish.

Bixby will now understand UK English language and will be able to respond to conversational British questions the same way you’d talk to a friend, just speak naturally and Bixby delivers.

Bixby adapts more to you—it learns your routines, your most-used apps and previous requests, so you can do more, faster. And Bixby’s universe of apps is constantly expanding, so there’s always something new to discover.

Say 'Hi Bixby…' and try a few of these commands:

While it’s good Samsung is still supporting and improving the Bixby service, it’s been slow progress since the launch nearly two years ago.

Despite promising to be a big competitor to Alexa and Google, Bixby still hasn’t built a massive user base in the way these smart home titans have, and it begs the question how long Samsung will persist with it.

However, Samsung is still keen on creating its own smart home ecosystem, primarily with its SmartThings platform, and presumably sees Bixby as a key part of that, hence the updates for more languages.

If we see a Bixby key on the forthcoming Samsung Galaxy S10, we’ll know there’s still at least another year of efforts from the South Korean brand to force its way into the virtual assistant space, and it’ll be interesting to see if it can offer something massively different or useful over the incumbents.