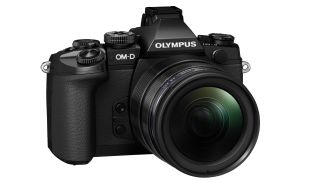 The new OM-D. Guess we'll have to stop calling the old OM-D the OM-D now.

Olympus has introduced a successor for the 18 month old OM-D E-M5 with the E-M1.

It features a new 16 million pixel Live MOS sensor and the seventh (and newest) generation of TruePic image processor for what Olympus claims to be the best ever images from an Olympus camera.

The E-M1 also boasts the fastest autofocusing system for any Olympus camera - considering the already very swift speeds of existing cameras should make it one of the fastest in the world. Dual Fast AF is designed to deliver very quick autofocus performance for both proprietary Micro Four Thirds lenses and Four Thirds lenses, which can be mounted on the camera via an adapter.

Dual Fast AF also means that the camera automatically detects which type of lens is being used to switch to the most appropriate AF technology - either phase detection of contrast AF. Four Thirds lenses work with phase detection, whereas Micro Four Thirds use Contrast detection. Both AF technologies are designed to accurately focus on any of the 37 autofocus points or 81 target areas.

The new processing engine, TruePic VII uses new Fine Detail Technology II, which is claimed to get the best image quality out of every lens by adjusting processing in line with the type of lens attached and aperture setting.

A new viewfinder is also included on the E-M1. It features 1.48x magnification – around 1.3x larger than a typical DSLR. It's also a high resolution at 2.36 million dots. A new feature for the viewfinder is HDR Preview Mode, which allows you to monitor images in the EVF before you shoot. Time Lag for the viewfinder is just 29 milliseconds, which is too fast for the human eye to detect and should result in natural movement, even with very-fast moving subjects.

The E-M1 is dustproof, splashproof and freezeproof, having the capability to work in temperatures as low as -10 degrees Celsius.

Another new feature for the camera is integrated Wi-Fi. The second camera in the Olympus interchangeable lens line-up to feature the functionality, you can use Wi-Fi to remotely control the camera or share images via your smartphone or tablet.

Olympus says that the new camera was designed in consultation with professional photographers, and so there are a number of re-assignable dials, switches and rings for the best ease of use.

Any existing E-System camera owners will be rewarded with a free adapter for existing E system lenses if purchasing the camera by November 2013. A free grip will also be available to any customer who registers for purchase in October.