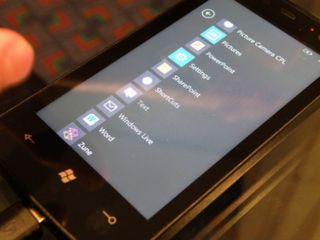 Microsoft will offer developers the option to implement a 'try before you buy' option on apps for Windows Phone 7.

At a recent briefing with Microsoft, TechRadar was told that one problem with free versions of applications on other app stores is people will install the trial, take a quick look then uninstall.

When asked to rate, the results are invariably low - therefore by placing both the free trial version of the app and the full price version together, the end rating will better reflect the quality.

Microsoft also promised us there would be 'enough applications on day one of the Windows Phone [7] launch' and that no longer would the phone interface simply be a 'sea of icons'.

Questions were also raised about the stranglehold Apple has on the big brand-backed applications, from the likes of Tom Tom and Nike.

But Microsoft also moved to allay these fears, stating: "We've got many brands who we already have business with us on a very large scale [from other platforms], so we're already connected to them.

"Now we're focusing on mobile we can use those connections and many of these applications [from big brands] will be coming at launch."

Microsoft is still stating a 'pre-Christmas' Windows Phone 7 UK release date, however we expect that to come perhaps a little earlier, with the end of October being rumoured.

This would make a lot of sense, given this is the beginning of the pre-Christmas rush, so we could be seeing new Microsoft-powered phones in four months' time.