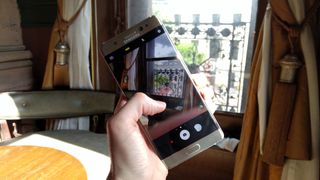 After months of rumour and speculation, the Samsung Galaxy Note 7 is almost here, launching in Australia on August 19 at the fairly substantial outright price of $1,349.

Yes, that's far from what you'd call 'chump change', putting the phablet squarely at the higher end of the smartphone pricing spectrum.

Thankfully, Australia's major telcos are offering the Samsung Galaxy Note 7 on a variety of postpaid plans, giving everyone a much better chance of getting their hands on the beastly device.

Telstra, Optus, Vodafone and Virgin Mobile have all announced their plans for the Samsung Galaxy Note 7, and as you'd expect for such a high end phone, they're quite pricey. Still, if you don't have a huge wad of cash to drop to buy this fabulous phablet outright, preordering the handset on one of these plans will be your best bet. Here's TechRadar's rundown of the plans on offer at each of the major Australian telcos.

In terms of size, the Samsung Galaxy Note 7 only comes in a 64GB version, though Telstra is also offering a free 256GB microSD card to all preorders of the device, giving users an enormous amount of storage for their handset.

It's also worth mentioning that the new (and quite standout) colour option of Blue Coral is not coming to Australia for baffling reasons that elude us entirely. Luckily, you'll still have three options to choose from in Gold, Black and Silver, each available on the following Telstra plans.

The entry level S plan costs $95 per month, offering customers 1GB of data and $550 worth of talk to standard Australian numbers. The minimum cost is $2,288 over the 24 months.

Next is Telstra's L plan. This bumps data and talk up significantly for $110 a month – only an additional $5 per month. Customers on this plan will receive 10GB of data. They will also receive unlimited talk, and a minimum total cost of $2,640 over the life of the plan. Quite frankly, it would be ridiculous to get the M plan over this.

Telstra's top XL plan costs $145 per month and offers customers 15GB of data. Talk is unlimited and the total cost is $3,480 over 24 months.

Each of the plans comes with 10GB of bonus Telstra Air data, which is Telstra's Australia-wide Wi-Fi hotspot network.

The Samsung Galaxy Note 7 is available on five different Optus plans, each on a 24-month contract with all of the handset's three shades on offer.

The most affordable plan costs $71 per month ($40 for the plan and $31 for the handset) and for that customers receive 1GB of data and unlimited talk and text within Australia (texting to selected international numbers is also included). The total cost over 24 months is $1,704.

The biggest plan Optus has on offer costs $120 per month, and comes with 20GB of data, unlimited talk, text and international calls. and international roaming is also included. This costs $2,880 over 24 months.