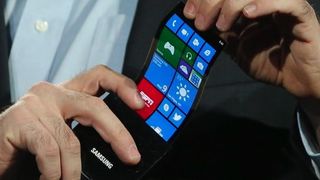 LG and Samsung both adventurously brought curved smartphones into the hands of consumers last year, with the G Flex and the Galaxy Round respectively and it looks like they might be at it again this year.

Reports out of South Korea, and spotted by DigiTimes, claim that according to 'sources from the panel industry' both LG and Samsung may have 5 inch phones with flexible displays on the market by September.

Apparently Samsung's flexi-phone will have a three-sided display, while LG's will have a QHD (1440 x 2160) screen with a pixel density of 510 pixels per inch.

Three sides are better than one

That sounds somewhat unlikely, as the LG G Flex had a 720p screen, due to the difficulty involved in fitting so many pixels on a curved display, though the Galaxy Round managed a 1080p screen... so you never know, LG might have managed to push things up to 1440p.

It's not clear whether these new phones will be successors to last year's handsets or something else entirely. It's previously been rumoured that a variant on the Galaxy Note 4 will have a curved screen, and that's expected to launch in or around September, so that could be the curved device that we'll see from Samsung.

Though, of course, it could all be nonsense. That's the fun of flexible phones.