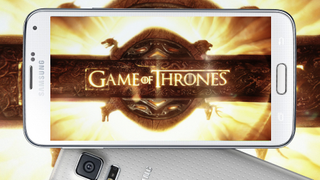 Which phone would your favourite character use?

The new series of Game of Thrones is back! The first episode aired in the US yesterday and will hit the airwaves in the UK and Australia this evening.

But what would the great and good of Westeros use to stay connected if they had a few more cell towers at their disposal rather than just the old stone kind?

The enslaved population of ravens currently used for intercity communications would certainly benefit from an advance in Westeros Telecommunications.

So we think it would be something like this... for science, of course!

They say it's lonely at the top, and that's when you're not a vicious, in-bred, narcissistic psychopath whose popularity finally gives farts in elevators someone to look down on. Much like the HTC First - the "Facebook Phone" - everything just went wrong for young Joffers, showing the difference between having friends and having Friends as sharply as a spike through the neck. It's not wise in the court of King's Landing to 'forget' to send the King a Friend Request, unless, of course, he sees it as presumptuous and burns your whole family to death as punishment before posting a photo of the horrific scene and ordering you to "Like" it. On the plus side, it's been great advertising for Google+.
Read: HTC First review

Many are surprised that Littlefinger isn't compensating with a great big phablet, even if they hate themselves for saying 'phablet'. To that, he merely smiles, chuckles politely, and begins tugging gently on the intricate spiderweb of their inevitable doom. Instead, he carries the YotaPhone, with its phone on one side and e-paper secondary screen for carrying notes on the other. For a professional manipulative bastard, nothing beats it. Easy phone access. On the other side, all the important notes that friends and enemies alike need to see... or at least, are meant to see, or led to think they see so that Littlefinger knows exactly what they've seen and can see to it that they don't cause a scene, even if they know they were meant to see it so that they didn't see what they wanted to see but can see themselves seeing through what they saw to see the scene they were intended to see all along. Do you see?

Phone of choice: The Red Nexus 5

King of the North! The upstart that charged onto the scene against an embedded opposition, quickly raised a huge army that would follow to the ends of Westeros... but in the end couldn't destroy the reigning champion, partly because of jumping into bed with too many people. No idea why he'd feel kinship with Android. Ahem. Of course, Android and the whole rebellion against the iRon Throne still count many powerful players, but they're arguably too focused on their own problems to launch the necessary full offensive. Will it matter though? There's nothing as dangerous as a wounded beast, and already the airwaves echo with rumours of an old threat re-emerging to rend all else asunder. "Wintel is coming," the people whisper. But then they remember the state of Windows 8, shrug, and add "Eh, we'll cope."
Read: Google Nexus 5 review

Dany is proud to carry the latest fashion and technology in the form of her Blackberry, and is just waiting for the day when her supporters finally send her a message to say it's time to come back and take the Iron Throne. Clearly, the only reason they have yet to do so is that they're waiting for a signal. Not many cell towers around King's Landing, even if she does occasionally spot Jorah playing those silly games of his. Well, spending a lot of time fretting about some angry bird getting in a flap, anyway. What else could it be? Next she just needs to get her dragons connected so they can call home if they get lost. They don't need much though. Just cheap handsets that do the job, but are easily enough replaced. You know - burner phones.
Read: BlackBerry Q10 review

A Lannister always pays his phone bill, and of course Tyrion has a golden iPhone 5S. But not just that golden colour frippery that just anyone can find on the Apple Store, but one crafted in solid gold, dotted with diamonds, rubies and engraved with his father's heartfelt birthday message "Enjoy the ride while it lasts, shameful abomination of my balls." It's a Lannister thing. Which is probably why he never actually uses it in any non-prostitute impressing capacity, but instead favours classics like the Samsung SGH-E888 - the phone smaller than most peoples' hands. Not only can he feel some innate sympathy for these seemingly underpowered but still capable offerings, they're far easier to hide and keep hidden in the event of trouble on the road. Just don't ask where. Read: iPhone 5S review

Poor Bran doesn't have a wide choice of phones because he only has one available carrier: Hodor. And Hodor can't even spell 4G. Luckily, with some degree of prescience our young warg ended up with the Asus PadFone - the phone capable of becoming a tablet. The phone provides the brain. With the user's will, it plugs into the tablet side to really explore. It's not clear where any of this is going in the future, or if it'll be relevant in even a year's time. Or if it'll end up dying before it's gone anywhere at all. It could easily just be another shaggydog story. But for now it at least passes the time while wandering in the woods, and that's better than either of the other Stark siblings can hope for at the moment.

Nobody was quite sure what was happening when boring, by-the-book Stannis traded in his reliable iPhone for one based on Windows, but it soon became obvious he'd been talked into it by his new lady friend Melisandre who promised to pin him on her home screen. Since then it's not that anything's obviously gone wrong, but people trying to get in touch from their old phones do find themselves having a lot of issues with their call quality, and even trusted advisors increasingly get bounced to voicemail. They've tried to fight back rather than actually convert, but all to no end. For all her odd ideas, Melisandre never has a shortage of information at her fingertips that Stannis finds invaluable. Damn Live Tiles. Also she murders people who annoy her with her shadow magic. That's a problem too.
Read: Nokia Lumia 820 review

Phone of choice: Cat B15

As a pragmatic sellsword, Bronn has little use for your fancy devices and swanky little apps. He carries a phone as rugged as he is, except that he can probably handle a fall of more than a couple of meters and has never worried about operating while wet... laaaaaadies. Some think that in the middle of the rough lies a heart of gold, but no. Please. It's a cold, calculating, unfeeling machine, much like his phone. And don't think for a second that having dual SIM slots may speak to split loyalties deep within. Because that would be a ridiculous; SIM cards have no bearing on that. They're just SIM cards. Stop stretching this metaphor. Also, anyone who knows anything about Bronn knows he has but one loyalty; loyalty to Bronn.
Read: Hands on: Cat B15 review

More than most of Westeros, Arya needed a phone capable of roaming. But they all are, so that's fine. Taking inspiration from her big brother and his manly idea of a phone, she obviously chose this. Refusing to be confined though, and forced to hide every part of her identity, she's not running regular Android. No, it's Ubuntu Touch. Why? Why not? It may be a tough root to an uncertain future, but that still beats being stuck in the status quo. Sure, it's rough around the edges, there's not much guidance to fall back on, and it may well end up going horribly, horribly wrong. Either way though, there are killer apps in her future. Read: Google Nexus 5 review

The great and good can predict Sansa's phone before she even takes it out of her pocket. Of cause it's small and ladylike. Of course it's pink. But what they forget is that underneath the shell is very a capable performance with the same engineering her siblings can boast of, memory to record and hang onto every important detail, and the durability to take knock after knock and still keep going. Her phone is very similar, with the added advantage that you can hold it underwater for thirty minutes and it'll be fine. Sansa herself, probably not. But then, she's never actually been a position where she has to try. With her Stark blood and Littlefinger's tutelage, it'd be a bad idea to absolutely write off anything. For now. Read: Sony Xperia Z1 Compact review

Much like Irene Adler over on Sherlock, it's not entirely clear why Cersei would pick such an expensive phone better known for its £4000 odd price than its capabilities. But then, it's not entirely clear why Cersei does many things. Including her brother. When you're this close to the throne though, who needs pragmatism? Maybe she even likes to see her own strength and power in its titanium shell and sapphire screen. She always was somewhat deluded. Certainly, it's hard to imagine Tywin worrying about such luxuries, at least until someone makes one thin enough to slip in a pocket, play an MP3 of The Rains of Castamere, and skin an elk.

Phone of choice: None

Oh please. As if he would demean himself by using anything as insecure as a phone.

Which phone would YOUR favourite character use and why?