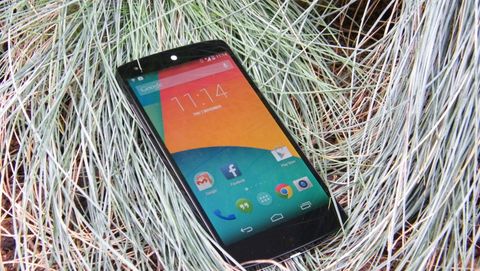 There's a minimalist charm to the Nexus 5 that's hard to resist. It's comfortable to hold, the display looks great, it's extremely fast, and it never slips up or stutters. This is Google's invitingly priced vision of a premium Android smartphone.

When the Nexus 5 launched in October 2013 it was lauded as "the best that Google has to offer", but almost two years on is that still the case or has the search giant's darling handset fallen behind the times?

The Nexus 5 has always been updated with the very latest software and it now boasts Android 5.0 Lollipop. I've updated this review to reflect this change and everything that the fantastic Lollipop update brings, as well as the increasing pressure from the new fleet of low-cost, yet highly specced competitors.

That said, the Nexus 5 is still a lean, mean Android machine, beyond the reach of OEM embellishment and carrier bloatware.

It delivers a streamlined experience that's stylish, refined and fast, and it does all this at a low price. Although, as already mentioned, that price isn't quite so jaw-dropping now.

The price has dropped steadily since launch, but seeing as Google has discontinued the handset (it's now officially listed as "no longer available for purchase") only a handful of retailers have units left, so if you want to get your hands on one, you'll probably want to get a move on.

Rumours are also beginning to swirl about a new Nexus 5 device coming in 2015, with LG once again being pegged as the company working with Google on the handset.

With a new Nexus 5 device on the horizon, it's likely that the current Nexus 5 could see some more price drops in the near future, which could make it even better value for money.

In terms of hardware the Nexus 5 is still just about a premium smartphone, it just doesn't have a premium price tag.

The Nexus 5 was able to hold its own with the top devices of 2013, including the iPhone 5S, Samsung Galaxy S4, HTC One, and Sony Xperia Z1, but hold it up against the flagships of 2015 and the Nexus 5 is left lagging behind.

Its 2.3GHz quad-core Snapdragon 800 chip isn't as power efficient as the 801 or 805 models which adorn recent high-end smartphones and while we're still seeing 2GB of RAM and 1080p displays on some of them, others such as the Samsung Galaxy Note 4 and the Nexus 6 come with more RAM and QHD screens.

If you want a closer look at how the Nexus 5 and the newer (and much larger) Nexus 6 compare, then check out our in depth head-to-head that pits Google's devices against each other.

We're now well into 2015 and Qualcomm's Snapdragon 810 chip is appearing in an increasing number of handsets - it's already inside the LG G Flex 2 and the HTC One M9 - which dates the Nexus 5 even more.

The Nexus 5 has been updated to Android 5.0 Lollipop; the biggest software jump for Android since Ice Cream Sandwich was unveiled in 2011 and proved Google could do software design well. 5.0 Lollipop completely redesigns the interface, brings in the new Material Design look and adds in many features OEMs have been including in skins for years now, a battery saver mode for example.

If you're wondering where Google cut corners on the Nexus 5 then you might point an accusatory finger at the camera and the battery life.

When compared to the very reasonably priced OnePlus One with a 5.5-inch full HD display, Snapdragon 801 processor, 3GB of RAM, 13MP camera and £199 price tag the Nexus 5 loses some of the value for money sheen.

There's also challengers from other firms in this space, with the likes of the Moto X (2014) and Xiaomi Mi 3 looking for a foothold.

I never expected to fall in love with the Nexus 5, but it seduced me. It certainly has its flaws, and I'll get into them in due course, but it's also a beautiful phone that sets a benchmark for Android.

While the Nexus 5 is no longer the flagship device in Google's arsenal, that honour falls to the 6-inch QHD display toting beast that is the Nexus 6, it's still for sale in some shops (though not from Google itself) and offers a pure Google experience to those who don't want a 'phablet'. You could say, it's the iPhone 6 to the iPhone 6 Plus.

As I rest it vertically on the arm of my couch it conjures visions of the monolith from 2001: A Space Odyssey. To soften it off and make it more comfortable to hold, the corners are rounded.

This black slab (which also comes in white and red) is all about the screen and the entire front of the Nexus 5 is glass. The only details that break it up are the round earpiece centre top and the front-facing camera to the left of it. There is actually an LED notification light down below the screen, but you'll only see that when it blinks into life.

With a Full HD resolution of 1920 x 1080 pixels, which translates to 445ppi, the Nexus 5 display looks crisp and accurate. It's an IPS display, and while critics will point to AMOLED's superior brightness and black levels, you'd be hard pressed to notice.

The back and sides are soft-touch, matte plastic and it only weighs 130g. Flip it over and you'll see a couple of design flourishes.

The word "Nexus" is embossed in lowercase gloss, with a tiny LG logo below it. Up top on the left you'll find the glaring round eye of the 8MP camera, which is surprisingly big. A tiny LED flash is just below.

The bottom edge has a standard microUSB port and there are two grilles either side of it - the Nexus 5 only has one speaker in there; the other hides a microphone. Up top you'll see the standard 3.5mm headphone port and a tiny hole for an extra microphone.

The Nexus 5 is one of the most comfortable phones I've used. It is comparably slow to heat up, so there are no issues holding it while watching movies or during extended gaming sessions. The soft-touch finish contrasts perfectly with the ceramic buttons, which makes them very easy to find and use without looking.

There are negatives. The camera lens protrudes enough to make you worry about it taking the brunt of any impact when the Nexus 5 is put down on a flat surface. That glass expanse, without any protective lip or border, suggests that a drop could easily result in disaster and scratches might be easy to come by.

Unlike the iPhone 6 and 6 Plus, which also boast a sizeable camera hump, the one on the Nexus doesn't have the added protection that a sapphire glass covering brings to Apple's devices.

There's also the inevitable smudging from fingerprints, which turns up on the back and the front, but that's a common problem.

It's not a flashy design, but the Nexus 5 does feel solid and well made. It may be a little big for easy one-handed operation if you don't have big hands, but the extra screen size will justify that trade-off for most people.

At this price, the design of the Nexus 5 is impressive. It's understated, almost making the iPhone 5S and iPhone 6 look gaudy, and it feels more expensive than the Galaxy S5.

Samsung has since taken back the design crown with the gorgeous Galaxy S6, leaving the Nexus 5 looking a little dated.