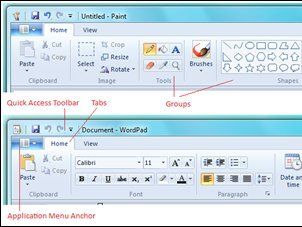 The ribbon in action

Developers working on the Windows 7 project have expanded on the changes they've made to Paint and Wordpad, and promised not to leave the next update for so long.

Windows 7 brings an extensive refresh to the basic applications, which have been included with Windows operating systems for years.

"As you get to try out these applications you'll see that while showcasing the Windows 7 platform innovations, we have also added some commonly requested features and functionality," reads the Engineering Windows 7 blog.

"Some of them are: check and correct, calculation modes and templates in Calculator; new brushes, shapes and multi-touch support in Paint; Open standards support in Wordpad and Ink; and text, taskbar and search integration in Sticky notes.

Most prevalent for users is the integration of the Ribbon interface that's become a feature of Microsoft Office, providing what Microsoft terms: "a rich, graphical user interface for all commands in a single place, without the need to expose various functions and commands under different menus or toolbars."

"The Ribbon UI is direct and self-explanatory, and has a labelled grouping of logically related commands. While using an application that is built on the Ribbon UI platform, the user only needs to focus on his workflow and the context of his task, rather than worry about where a particular function is located or accessible."

Windows 7 is already attracting a positive press, with the general consensus that it manages to be everything that Windows Vista should have been and more.

The new apps are already being tested by people who are signed up to the Windows 7 Beta, and TechRadar is already coating our collective desktops with colourful Post-its and drawing each other in a far more functional version of Paint.