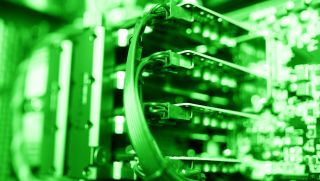 It seems the multi-GPU dream for gamers is dead, with both Nvidia and AMD seemingly moving on from their SLI and CrossFire features. Recently, AMD chief executive Lisa Su revealed  “that Crossfire isn't a significant focus” for the company, while Nvidia has dropped SLI for its most recent graphics cards in favor of NVLink – a similar technology but with some key differences.

While NVLink is used, like SLI, to allow two GPUs to work together for improved performance, Nvidia has been a bit coy about pushing the new technology – and it’s weary of suggesting that you’ll see better performance compared to SLI.

The increased bandwidth of NVLink should allow the graphics cards to work better together, and in the future this could result in more clear benefits for running more than one GPU. However, this is dependant on game developers taking advantage of this new technology.

As we saw with SLI, that may not happen. The amount of gamers who will be running more than one Nvidia RTX GPU with NVLink will be relatively small, and many games developers may think it’s not worth their time to fully embrace the tech.

There’s a danger, then, that NVLink goes relatively ignored. As for SLI, if Nvidia (and games developers) do push for NVLink compatibility, it could be the final nail in the coffin for the older tech.

Meanwhile, AMD doesn’t appear to have any new tech to replace CrossFire, which is its SLI competitor, with Lisa Su being rather blunt about how interested AMD is in CrossFire (spoiler alert: it’s not interested at all).

So, the future’s looking pretty ropey for multi-GPU gaming. But is that a bad thing?

Struggling to reach its potential

While the idea of having more than one graphics card in your gaming PC to boost performance is a sound one – after all, you’ll have more GPUs to share the workload – in reality, it never reached its potential.

Perhaps the biggest limiting factor was the law of diminishing returns, which multi-GPU systems encounter. What we mean by this is that by adding a second GPU, you’re not actually doubling the graphical power of your system. Most best case scenarios offer around a 50% increase.

That’s not too shabby – though remember that’s a best-case scenario, and won’t apply to every game – but the fact of the matter is that you’re paying full price for a second GPU, but not getting the resulting boost in performance you’re paying for.

It gets even worse if you add a third or fourth GPU – as the performance increase gets smaller each time. It ends up being a very costly way to get a bump in performance.

As many PC gamers realised, a far more reliable (and affordable) way to get a boost in performance is to buy a single more powerful GPU, rather than two or more less powerful cards.

That’s not the only extra cost associated with a multi-GPU setup. Running more graphics cards ups the power consumption of your PC (increasing electricity bills) and also produces more heat – leading to a noisier PC. For too many PC gamers, these are compromises they’re not willing to make.

The fact that SLI and CrossFire setups are relatively rare has caused a bit of a vicious circle. One of the biggest complaints about multi-GPU setups is that support for them – both in games and with drivers – is pretty spotty. Many people running SLI or CrossFire would find that some games simply ignore the extra GPUs, leading to them not benefitting from the extra graphical firepower they paid for.

Even worse, some games would encounter problems with multi-GPU setups, leading to a degradation in performance.

So, Nvidia SLI and AMD CrossFire are effectively dead. But is that a bad thing?

Modern GPUs to the rescue

We’d argue not. After all, the most recent GPU releases from both Nvidia and AMD are fantastic performers. Especially at the top end, a single modern graphics card can easily handle almost any game at full graphical settings at 1080p resolution – which remains the most popular resolution.

For the minority of PC gamers that have monitors with higher resolutions, such as 1440p, you still won’t need more than one GPU for an excellent experience. For 4K and beyond, some GPUs will flounder, but with a bit of tweaking on a high-end card, you’ll still get a game experience that blows consoles out of the water.

So, we’re not going to mourn the death of multi-GPUs – even though we have a system with two Nvidia Titan Xp GPUs in it. It’s a great performer, but the idea of swapping out those two GPUs for a single ultra-powerful GPU in the future is very exciting. While we’ll be keeping an eye on what Nvidia does with NVLink, in our view the age of multi-GPU gaming is over. And it’s for the best.