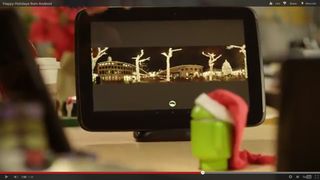 Google looks certain to launch a dock connector for its Nexus 10 tablet after the unannounced accessory appeared in a festive video.

The 'Happily Holidays from Android' clip, posted this weekend, features the Android mascot meeting up with pals and the latest generation of devices, the Nexus 4 phone and the Nexus 7 and Nexus 10 tablets.

The clip shows a user placing the Nexus 10 tablet in a small dock connector and playing Christmas-themed content, much to the delight of the cute wee green droid.

The appearance suggests that the launch probably should have happened by now, or that its release is imminent.

The video comes after an official Nexus 7 dock - also featured in the video - went up for pre-order through third-party retailers.

You can check out both in the video below.