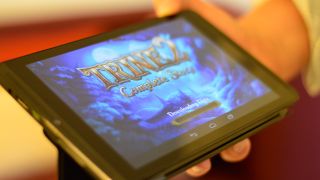 Bad news Nvidia Shield Tablet owners: thanks to a battery issue your slate may inadvertently set itself on fire.

Nvidia has announced an official recall for every Shield tablet sold in the year since June 2014. The graphics card company also warns that users should stop using their tablets immediately because of the battery issues, which cause the device to overheat and potentially burst into flames.

Ironically, to actually begin the process of sending a tablet back to Nvidia users will need to turn on their device and fully update it to the latest software, after which Shield Tablet owners will need to dive into their specifications listed in the "About tablet" section of the "Settings" and check if the battery version is "Y01."

Don't put that potentially flammable tablet down yet though. If the Shield Tablet indeed has a Y01 battery, you'll receive a notification that includes the device's serial number and a prompt to enter your claim for a replacement slate on this website.

Announced last year, the Shield Tablet was made for gamers with a Nvidia Tegra K1 Kepler GPU and 2.2GHz ARM Cortex A15 CPU. It was capable of playing games on the device, streaming from an Nvidia GPU-powered PC as well as 4K video output.

Obviously, running heavy tasks on any device is bound to generate plenty of heat; but for this tablet, apparently it was enough to cause some devices to catch fire.