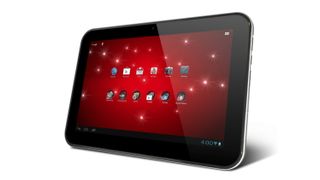 If at first you don't succeed, try, try again. That seems to be Toshiba's motto as the company debuts its new Excite tablet line on April 10.

The Excite tablets have kicked things up a notch with Tegra 3 processors and Android 4.0 Ice Cream Sandwich, but the rest of the song sadly remains the same.

A size for all tastes

The Toshiba Excite line attempts to cover users of all walks of life, with a junior-sized Excite 7.7 at the small end, a more traditional Excite 10 (Toshiba AT200 in the UK) that attempts to go head-on with the new iPad and the Samsung Galaxy Tab, and a downright gargantuan Excite 13, a first of its kind with a spacious 13.3-inch screen.

But are these kinds of options what the consumer is really looking for? In an era where the iPad brand is becoming synonymous with all tablets, throwing different sizes against the retail wall to see what sticks may not excite consumers (pardon the pun).

Additionally, the fractured Android tablet market and the variety that exists therein may be the ultimate undoing of Android tablets. Simply put, the marketplace is already too confusing for consumers and app compatibility can be hit or miss.

Same as it ever was

Worse yet, Toshiba appears to be making the same strategic mistake in pricing that all Android tablet makers have made thus far - trying to match financial wits with Apple's iPad.

Even more perplexing, the Excite 7.7 arrives in early June at $500 (around £315) for 16GB - $50 more than its bigger brother and even matched with the entry-level new iPad, presumably due to the higher quality AMOLED display. (A 32GB model gets a little more reasonable at only $580 (around £365).)

While Toshiba's Excite tablets boast niceties such as 1GB RAM, SD card slots (micro on the 7.7, full size on the 10) and cameras that match the new iPad, there may be no compelling reason to choose either of these models - especially with a $200 (around £125) Google Nexus tablet rumored to be arriving this summer.