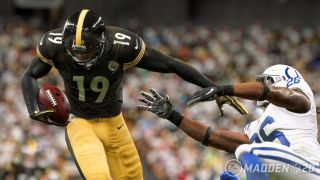 Looking to play Madden NFL 2020? You're in luck: the latest entry in the American Football video game franchise is here, having launched in early August and already letting countless players live out their sporting fantasies.

E3 2019 had a lot new Madden info in store for us from EA Sports, with all sorts of updates on its debut modes, player-exclusive moves, and old favorites game types like Pro Bowl making a return.

Face of the Franchise is the big highlight to Madden for 2020. For the first time, you can create and develop your own quarterback who goes from of one of ten D1 schools to the road to the next NFL superstar. Scenario Engine brings dynamic challenges to games to improve your player's stats along the way.

X-Factor abilities are the reason you'll still want to play as real-life superstar players. For example, Kansas City Chiefs QB Patrick Mahomes is the Madden NFL 2020 cover athlete and he has the exclusive Bazooka Superstar X-Factor ability. It stretches his normal reach by 15 or more yards when he's in this special zone. This is on top of normal Superstar moves of Escape Artist, Dashing Dead eye, Red Zone Deadeye.

Madden NFL 20 X-Factor abilities branch out beyond quarterbacks, too. Los Angeles Rams defensive tackle Aaron Donald has an X-Factor move called Fearmonger, and it's designed to intimidate and overcome blockers when he's in the zone. New Orleans Saints wide receiver Alvin Kamara has a zone-enabled 'Satellite' X-Factor that allows him to perform better in key one-on-one situations.

Pro Bowl is back in this year's football game, and it's been expanded to include these new superstar X-Factors, according to EA Sports. And since the Pro Bowl features the best non-Super Bowl players, it should be an over-the-top special-skills-based game.

There are X-Factor counters, of course. Madden NFL 20 is turning into a chess game of sorts, so putting pressure on a quarterback like Mahomes in the game will prevent him from getting into the zone and executing Superstar X-Factor moves like Bazooka. New mechanics like pump fake and the ability to cancel throws is really changing the game and mixing things up.

Playbooks are getting reworked in meaningful ways. There are new run pass options – 220 RPOs to be exact – being added to the game, as well as unique formations. Signature animations are coming to players and teams, and so are popular new plays like the renowned trick play Philly Special that was pulled off by the Philadelphia Eagles in the last football season. Best of all, as the real-life season is happening, your team's Madden 20 playbook can change.

Madden NFL 20 was released on August 2, 2019, retailing for $59. Pre-ordering granted buyers five Gold Team Fantasy Packs as well as their pick of one out of 32 Core Elite Players from your favorite NFL team.

There's also not one but two special editions. The first, Madden NFL 20 Superstar Edition, costs $79. For that extra cash, you get 12 Gold Team Fantasy Packs and one small Training Quicksell Pack in Madden Ultimate Team. Buyers also get early access to play the game on July 31, 2019, a full three days ahead of the standard launch date.

EA Sports has already revealed a lot of the new features coming to Madden NFL 20.

Face of the Franchise: QB1 is the big new single-player mode: craft your player, pick their college, guide them through a draft and begin their big career. Thereafter, Madden’s new Scenario Engine generates personalized playable scenarios, events, and dynamic challenges, per the game's website.

The regular Franchise mode is back, and features the return of Pro Bowl. The whole mode has been refined with new scenarios and tweaks all around, from ratings spread to player progression.

There's also a new category for elite players: Superstars. 50 players in the game will fit the bill, and at certain points of play, they'll enter "the zone" and get bonus Superstar X-Factor abilities. These aren't ratings boosts or modifications, the game's site clarifies: "These are behaviors, characteristics, and situational outcomes, aspects of football, and it will be very clear to our players what impact they are having on the game by complimenting the player ratings, not modifying them."

The popular Madden Ultimate Team (MUT) mode returns as well, and it's got a couple new features. Missions is a new feature that acts more like guidelines than a task-and-reward system. "Think of it as a roadmap to upgrading your squad with the items you want, with a clearly laid out path of how to earn those items or rewards," explains the game's website.

In MUT, Solo challenges have been replaced by Ultimate Challenges, and the Superstar abilities and X-Factors are also supported. Only some chemistries have been brought over from Madden 19 to Madden 20, though new ones have been added. The mode will include player archetypes, a reorganization that clarifies player strengths with their roles on the field, and a return of House Rules.

We're also curious how the game will change given this is the first in the series without creative director Max Dickson, who left six months before the release of Madden NFL 19.

Madden 20 will be the third in the franchise running the Frostbite engine, and given the smoother action in last year’s entry with Real Player Motion, we're keeping an eye out for how this version has been tweaked.

What we want to see from Madden NFL 20

We’ve put this on our wish list for years, and we’re still hoping the next Madden game comes to the Nintendo’s fantastic hybrid console.

EA has released a Switch version of the past couple FIFA games, and while they haven’t had the full list of features and modes that are present in their PS4 and Xbox One counterparts, owners of the Nintendo console did get to play a mostly intact port. We’re hoping Madden NFL players get to do the same.

Perhaps Madden 19’s next chapter of the single-player mode introduced in Madden 18, Longshot: Homecoming, was underwhelming. But it was still a favorite experience when it appeared two years ago, and we’re hoping EA Sports has course-corrected to tell better chapters in the stories of underdogs Cruz and Colt. Or maybe just start from scratch and give us a couple (or handful) of new characters to invest in.

Alas, Face of the Franchise: QB1 seems like the single-player story/campaign mode that's set to take Longshot's spot, but as the internet wisdom goes, 'Why not both?'

Okay, this is a bit greedy given EA only announced its cloud-based, stream-to-any-device service Project Atlas last October. But we’d love to see this Google Stadia-before-Stadia-was-announced service start showing up somewhere, somehow in Madden NFL 20.

How could it help? All that compute could give players much more context to their plays. In a Medium blog post introducing Atlas and explaining AI applications, EA CTO Ken Moss explained it this way:

“Imagine that you’re playing Madden, and you’ve just thrown your second interception of the game against the same cover 2 defense that caused the first turnover. Instead of the commentator simply stating that you threw a pick, the AI enables contextual, real-time commentary to reference the fact that you’re throwing to the sideline against a cover 2 defense and should have thrown against the weak zone over the middle to your tight end, who was open on the route.

“This would certainly push the game into a greater level of contextual and experiential realism. The AI is working with your gameplay. It’s responding to your needs as a player.”