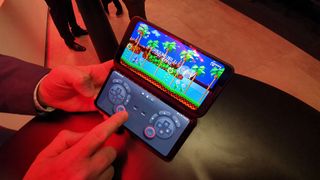 Despite being announced in February, the LG V50 ThinQ only actually hit stores in May, yet LG seems to already be teasing the V60 ThinQ for a September announcement.

In a brief video (below) the company teased that a new device will be unveiled on September 6, at IFA 2019. While the device isn’t named, the teaser includes a phone-like screen, which then opens out to reveal a second display.

This strongly suggests that the handset will be a successor to the LG V50 ThinQ, as while the V50 ThinQ only has one screen, it also supports a second screen attachment called the LG DualScreen. We’re only guessing at the V60 name, but LG has previously trademarked that name (along with V70, V80 and V90).

But what can we expect from the phone, other than a second screen? Well, the teaser shows a video game character collect a camera and a gamepad, suggesting the phone could put a focus on photography and gaming.

Beyond that, LetsGoDigital has spotted a patent for an LG phone with an all-screen front and a punch-hole camera. This would be a first for LG, and in the patent the camera includes what appears to be two sensors, alongside a lens.

It’s not clear what the specs would be, but the extra sensors could well be to allow for some form of advanced facial recognition along the lines of Face ID on the iPhone XS.

Of course, that’s just speculation for now, and even the presence of a punch-hole is far from guaranteed – patents don’t always become products, and while it’s likely LG will eventually embrace the punch-hole, there’s no real indication that it will do so for the V60 ThinQ, so don’t count on this.

Still, with the phone landing fairly soon we’d expect plenty more leaks and rumors to emerge in the coming weeks, so stay tuned.