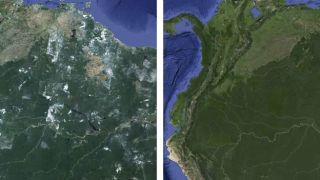 Google has rolled out new satellite imagery for its Google Maps and Google Earth services to showcase a world in higher resolution than ever before and without cloud cover.

The new imagery, which globally amounts to 800,000 megapixels (that's around 15 metres per pixel), comes from the Landsat 7 satellite and shows the texture of the planet in much greater detail than before.

To obtain the new view of the world, Google was able to mine hundreds of terabytes of imagery from Landsat 7 and repair the damage done to the images by a hardware failure suffered shortly after launch.

Using its Planetary Time Machine technology, Google was able to piece together images shot at various time intervals to to showcase the globe almost completely free of cloud cover.

Earth, Jim, but not as we know it

As is often the case, this wasn't the only update Google's mapping team unleashed on Wednesday. The company has also boosted its Google Earth app for iOS devices.

Version 7.1 brings Street View into the equation for the first time, along with a streamlined interface and a Wikipedia layer.

The updates bring the iOS app in line with the Android version, which got a fresh coat of paint last month.