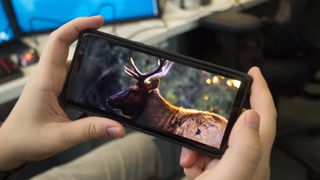 You've probably seen it mentioned, but never really understood what you're seeing: HDR is a thing in your smartphone's camera, but it's coming to screens as well.

It's also being bandied about on high-end TVs as well, so it's clearly a good thing... but what does that actually mean for you and the next phone you might buy?

HDR stands for high dynamic range. You may have seen this term in your phone’s camera app, where it’s used to bring out more detail in a photo’s shadows. It also helps avoid overexposure, which turns parts of an image into blocks of white.

High dynamic range movies and TV shows work slightly differently. HDR video widens the distance between the darkest parts of the image and the brightest. This increased contrast brings out the detail in both the dark and brights of the image, making for more cinematic video.

For the best results, HDR content requires a display with a high contrast ratio and a high peak brightness. The image is always constrained by how bright and dark a display actually appears.

HDR content has its own formats: it’s not just a filter applied to normal footage.

The HDR standard seen most often in mobiles today is HDR10. It’s also the most common in TVs. Because HDR10 is an open source format, there are no licensing fees attached to it, meaning device manufacturers can freely support it.

HDR10 supports content mastering up to 4000 nits (a measure of brightness), 10-bit colour and the REC.2020 colour gamut.

If this all sounds like tech jargon, it simply means that HDR footage can be mastered with more colour and highlight more details to give a better quality picture.

HDR videos also come with attached metadata. This lets a screen, whether it’s a phone or TV, tailor that footage to suit the capabilities of that actual display. No consumer TV or phone can actually display the full depth of colour in the REC.2020 format HDR10 can use, for example, but it can get as close as it can with that info.

Some phones - like iPhone XS Max - also support Dolby Vision, a higher-spec HDR standard that accommodates even brighter screens that display 12-bit colour. It also has variable metadata, which means content creators can adjust how a movie interacts with a display on a scene-by-scene basis.

Where can I get HDR video?

There are already numerous channels dedicated to HDR video, including The HDR Channel and Future Etc. A playlist posted by the YouTube Developers channel has also collated a series of pretty HDR clips to support the launch of HDR on YouTube.

To check if you’re watching an HDR clip, tap the three-pip icon in the YouTube app to bring up the settings menu, then the Quality menu item. This shows the resolution of the current stream, and is followed by “HDR” if it’s a high dynamic range clip.

Netflix and Amazon Prime Video can also stream to compatible phones and TVs in HDR.

Highly-regarded HDR movies and TV shows on Netflix include Marvel’s Jessica Jones, Black Mirror, Ozark and Ojka. On Amazon, check out Sneaky Pete, The Man in the High Castle, Batman vs. Superman and Inception.

Netflix publishes a list of phones and tablets that currently support HDR streaming.

What is Mobile HDR Premium?

If you’re on the hunt for a HDR-capable phone, you may encounter the term Mobile HDR Premium. This is a certification, promoted by the UHD Alliance, a body that works on behalf of tech, content and TV companies to promote things like HDR and 4K UHD.

Only a handful of Samsung phones, including the Galaxy S9 and S9+, have adopted this branding, and it’s no longer promoted on the Samsung website. The Sony Xperia XZ Premium can do the same but isn't the flagship phone from the brand.

However, it effectively means the phone’s hardware is good enough to do justice to HDR content, indicative of a bright, high-contrast display.

You may also hear about the DisplayHDR standard (e.g. DisplayHDR 4000). This is currently being rolled out to PC monitors, indicating how adept they are at displaying HDR content (the higher the number the better the performance).

It’s not a standard that’s not currently applicable to smartphones, but something to be aware of in case it’s ever picked up by manufacturers.

You don’t have to make do with official HDR streams to enjoy HDR. Phones are starting to use tech that upscales standard dynamic range (SDR) content to HDR in real time.

The Sony range was the first to bring this feature to smartphones in the UK, offering smart upscaling from the likes of the Xperia XZ2, with a range of services from places like YouTube and Netflix benefitting, with other manufacturers now following suit.