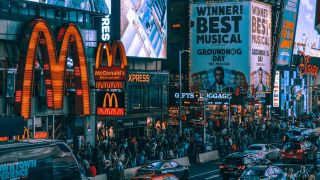 Unless you’re a taxi driver, you probably don’t think in terms of specific street names when you’re getting around a city, and it’s easy to miss signs while you’re concentrating on the road.

That’s why Google has started giving directions using nearby landmarks as points of reference. So instead of telling you to turn right onto Acacia Avenue, for example, it might tell you to turn after the KFC.

So far the feature has only been seen in New York City, and Google hasn’t yet announced whether it will be rolled out more widely. However, it seems like it could be relatively straightforward thanks to the Google Place Search API, which lets users find nearby stores, services and points of interest anywhere in the world.

So far, all the examples seem to be based on the location of fast-food restaurants, but it doesn’t appear to be a form of advertising (yet).

Something old, something new

The news comes just a day after Google announced that it’s using laser scanning, drones and photometry to create virtual copies of historic landmarks that have been lost or destroyed over the years.

The models are available via a new Arts and Culture app for iOS and Android, and you can explore them in 3D using a Google Daydream headset.

Seeing the two combined in augmented reality could make driving an interesting and educational experience – "take a left at the ancient catacombs, then continue straight to the McDonald's".