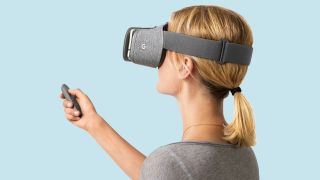 Looking for more to do with your virtual reality-ready smartphone and Daydream View headset? You might find what you're looking for just by browsing the web.

Google announced today that it's updated the Chrome browser to support VR-enabled websites, allowing those surfing applicable parts of the net to strap on their goggles and dive in.

Anyone without a View headset can still watch VR content on any phone or computer running the latest version of Chrome, but will have to settle on using their finger or mouse to interact with the screen.

As for ways to try out Chrome's latest feature, Google suggest sites such as Bear71, an interactive documentary about animals and technology, Matterport, a virtual tour of luxury homes and historic locations, Within, a compilation of VR films and documentaries, SketchFab, which features artist-made 3D scenes, and Web VR Lab, an explorable 3D area with interactive objects.

In addition to the Daydream View headset, you'll need a Daydream-capable phone, which currently includes Google's own Pixel, the ZTE Axon 7, and the Motorola Moto Z.

Google says more headsets will be supported to handle VR websites "in the coming months," to include the tech giants own cost-effective Google Cardboard.