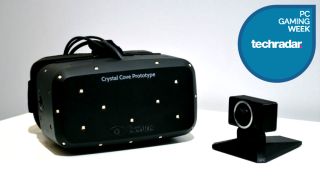 The following article is from The Ultimate PC Building Handbook, published by Future, which contains 180 pages of PC upgrading advice from the experts at PC Format and Maximum PC.

You might have heard about the Oculus Rift. It started life as a Kickstarter campaign to create a wearable virtual reality head-mounted display that can be connected to your PC.

Its eventual aim was to finally live up to the potential of virtual reality by making us feel as though we are really inside the game – and avoiding the headache-inducing problems of its low resolution, lag-afflicted forebears. Some of us are still dizzy from trying Nintendo's Virtual Boy in the 90s.

The Rift's potential has led to it being incredibly successful – and it hasn't even been officially released yet. When Facebook buys you for $2 billion (around £1.35 billion, AU$2.55 billion), you know you're on to something pretty amazing.

What makes the Oculus Rift stand out from the failed virtual reality offerings of the past is that it has successfully achieved presence when running in-game. What this means is that when you're wearing the Oculus Rift, your brain can be fooled into believing that you actually are in the game world.

This is achieved through a number of technologies that work together to make the virtual reality of the Rift as convincing as possible. Needless to say, for this level of immersion, you're going to need a very capable PC.

Part of the appeal of the Oculus Rift is that you'll be able to plug it in to almost any PC. At the moment, there aren't any minimum system requirements to use the Oculus Rift – all it needs is an HDMI or DVI video-out port, which almost all recent PCs have.

However, just because you can plug the Oculus Rift into your Windows Vista laptop with 1GB of RAM and onboard graphics, doesn't mean you should. The more powerful your computer, the better the virtual reality experience will be – so if you really want to achieve presence in-game, you might have to be prepared to perform some upgrades. However, the promise offered by the Oculus Rift means that it will be well worth the expense.

If the Oculus Rift hasn't officially launched yet, why would you think about upgrading your PC now? Well, to start with, just because the consumer version isn't available to buy, it doesn't mean you can't use an Oculus Rift right now. The Oculus Rift DK2 (Development Kit 2) is currently being shipped out to people who have pre-ordered it, or supported Oculus Rift on Kickstarter.

Although it's primarily for developers who want to make, or port, their applications and games to the Oculus Rift, it does contain a number of advancements over the original Development Kit, most of which will make it to the consumer version when it releases. If you simply can't wait to try the Oculus Rift (and who could blame you?), the DK2 is a good choice.

It's also never a bad idea to begin planning your upgrade now, in preparation for the release of the consumer version. You don't necessarily have to go out and buy all the new components right now, but it's a good idea to know what you'll need to upgrade, so your PC is ready when the consumer version launches. There's very little worse than having a new toy still in its packaging because your PC isn't up to the task.