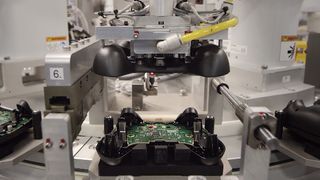 Valve's quirky Steam Controller has sold over half a million units, according to the company.

The Steam Controller was released in November 2015 to accompany Valve's Steam Machines, which are basically gaming PCs built for the living room. Valve had to rethink how a gamepad would work in a living room setting by replicating mouse control with dual touchpads.

We weren't fans of the controller because of its incompatibility with all games and mushy buttons. However, many users fell in love with the Steam Controller's customization options and for its ability to play just about any time of game on the couch. You'll need to reprogram how your brain thinks a gamepad should work but those who've invested the time will find it rewarding.

To celebrate, Valve is releasing a major software update that lets you use the Steam Controller with non-Steam apps as well as VR. The controller now works in VR Game Theater mode and will let you use motion controls for racing games.

Support for non-Steam apps means means you can now control other apps by using its trackpad as a mouse and you can even type with the controller using the on-screen keyboard. Steam Machines don't have apps like Netflix built in, but since they're full-fledged computers, you can simply navigate to the website to stream.

Valve is also discounting the Steam Controller and excellent Steam Link game streaming box 30% this weekend. You can snag each for $34.99 (£27.99). The discount offer ends June 6.