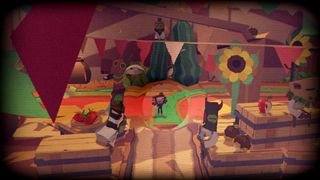 Next year's games are looking fine

We tend to like to start our weekly roundups on a positive note, but this week's most saddening occurrence was the death of a true pioneer of the gaming world we love.

The death of Ralph Baer robs us of a man often called the 'father of video games' due to his role as the inventor of the first commercial video console - with his brown box being manufactured and sold as the Magnavox Odyssey.

And, because true genius doesn't rest on its laurels, Baer not only lays claim to the first cartridge game and first analog controller but he also invented the first light gun and 'Simon' the 'Simon Says' toy that anyone over the age of 30 probably had in their Christmas stocking.

So RIP Ralph Baer - it may be game over, but what a legacy to leave behind.

Onto happier things, as we spent some time getting a glimpse of just what games would define PlayStation in 2015. TL;DR? Lots of awesome, no sight of Half Life 3. But we live in hope.

Sony's PlayStation stole most of the headlines this week, our head was turned not only by the 20th anniversary special edition PS4 but also by the chance of getting one for cheap.

But, despite movement in both Oculus Rift and Google's Cardboard, we found out that you shouldn't be holding your breath for a Project Morpheus VR just yet.

Basically kids, don't hold your breath for any piece of kit without a hard release date, it's just stupid.

We also took the time out to update our big preview of E3 2015 - explaining just what we want to see - and our list of the best android games in 2014.

Meanwhile, over on GamesRadar+ they picked out their games of the year. We won't spoil who made the cut - but only because we got distracted by some Star Wars news and we saved it to read in our lunch hour.

Last, but not least, if you want to take sneak peak at what games and gaming kit some of the TechRadar team across the globe would like to find in their stockings - you can take a look at our Christmas Wishlist.