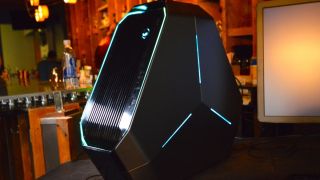 The Consumer Electronics Show (CES) is a tech fair that usually brings all sorts of craziness, and we're not talking about the Vegas crowd. All manner of gadgets and gizmos are demoed at the show, year after year, and frankly, most of them never actually make it to market.

Companies like to show off a lot of concepts at CES to wow the audience and grab the limited share of press mindshare, but you can't blame them for trying—everyone's vying for attention.

The good thing about all of this is that it shows the effort being put into being innovative, regardless of whether or not there's a practical use. Thankfully, there's a lot of that happening in the PC industry and one of the areas that excites us is how the shape of the PC, the form factor, can be changed.

In the last few years, the most striking development was actually from Apple, in the form of the black, cylindrical Mac Pro. Everything was custom designed, including the innovative cooling system. Then there was Razer's Project Christine, which was announced at CES a year ago. Unfortunately, that didn't make it to market, but it was still exciting to see. Later in 2014, Alienware debuted its striking Area 51. Needless to say, we were equally excited to see CyberPower PC unveil its "Fang Trinity" PC this time around.

Developed by DeepCool, the Fang Trinity PC is an interesting form factor that separates components in a way that's similar to Razer's Project Christine, except it's a lot more practical. Where Project Christine failed, Fang Trinity succeeds. The chassis accepts off-the-shelf parts, which means that you can make upgrades as you see fit.

It doesn't restrict you to proprietary modules, and still succeeds in allowing for a good amount of expansion. In fact, Fang Trinity supports significant storage expansion: space for three or more SSDs, two HDDs, and even an optical drive. Liquid cooling comes standard, and yes, it takes a full length, full-fledged graphics card.

But alas, nothing's ever perfect. Fang Trinity is heavy. CyberPower PC says that the final version will be aluminum-based, significantly reducing its weight. The shape, however, will likely be problematic for some users.

The footprint is wider than a typical case, and it's certainly not as easy as toying around in a traditional chassis. Also, because the graphics card is in a separate compartment to the motherboard, a PCI Express extender is used that could impact signal and performance. There are obviously still a few things that have to be worked out on the Fang Trinity.

But this goes to show that companies are thinking of new ways to improve existing products. It may seem small, but changing the design of one element of a system can impact its function, and usability. Products like Alienware's new X51 and CyberPower PC's Fang Trinity PC take interesting approaches to problems such as thermal management.

As with anything in life, making changes often requires compromises in some form or another. We're excited to see companies willing to experiment - heck, even make mistakes. At the end of the day though, the users will vote with their wallets, and if a product is sincerely awesome, it won't need the hoo-ha of CES to be successful.