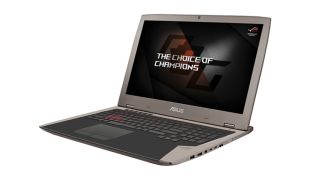 Asus has unleashed a new gaming notebook which boasts a 120Hz display that benefits from G-Sync, and is backed by some blistering hardware including a chunky Core i7 CPU and GTX 1080 graphics solution. It’s on sale over in the US now starting at $3,099 (around £2,500, AU$4,140).

Asus says the Rog G701VI notebook is the first in the world to have an IPS panel (for wide viewing angles) which offers a 120Hz refresh rate along with Nvidia’s G-Sync technology to help combat stuttering and tearing, and make for smoother gameplay all round.

Depending on whether you go for the G701VI-XB72K or G701VI-XB78K, you get either 32GB or 64GB of DDR4-2400 system memory respectively, and either a single 512GB NVMe SSD for the former model, or a pair of these SSDs in RAID 0 with the latter more expensive notebook.

These are the only two differences between the two models of the G701VI – all the other specs remain the same.

The laptop is 34mm at its thinnest point and weighs 3.6kg. It boasts a built-in subwoofer and speakers, plus an ESS Sabre DAC and amplifier to make the best out of your gaming headphones if you’re going that route.