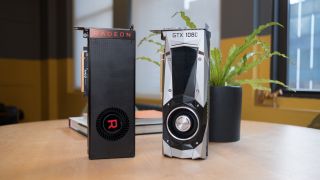 AMD has taken Nvidia to task over the latter’s partner program for GeForce graphics cards, using a blog post to state that AMD is on the gamers’ side – and that it’s all for promoting freedom of choice in PC gaming – inferring that Nvidia isn’t.

In case you missed the controversy that erupted over Nvidia’s GeForce Partner Program last month, an investigate report from HardOCP levelled accusations of this scheme potentially damaging the level of choice the consumer has when it comes to graphics cards.

Mainly because those manufacturers who want to benefit from Nvidia’s scheme (and there are apparently some serious benefits – including marketing funds) would only be able to sell GeForce cards in their gaming brand, and not rival GPUs, the argument went. Read the full piece here.

So there are a couple of things to note here from the off. Firstly, Nvidia flatly denied any such strong arming, and secondly, in this new blog post, AMD makes no direct mention of Nvidia at all. But it’s pretty clear who the post is taking pot-shots at.

Written by Scott Herkelman, AMD’s Corporate VP of Radeon Gaming, the blog post states that AMD pledges to reignite freedom of choice for gamers, and also the “freedom to tell others in the industry that they won’t be boxed in to choosing proprietary solutions that come bundled with ‘gamer taxes’ just to enjoy great experiences they should rightfully have access to.”

Another section of the post declares: “We pledge to put premium, high-performance graphics cards in the hands of as many gamers as possible and give our partners the support they need without anti-competitive conditions.”

It’s that very last mention of ‘anti-competitive conditions’ which is the biggest shot fired across Nvidia’s bow, of course, and it’s clear enough that this is a reference to last month’s allegations.

The other main point here is the following statement from Herkelman: “Over the coming weeks, you can expect to see our add-in board partners launch new brands that carry an AMD Radeon product.”

And, as Tom’s Hardware reports, Asus has already announced a new brand for its AMD graphics cards. Rather than ROG, these AMD GPUs will be branded as Arez going forward. They’re the same cards, just with a different brand and packaging.

Funnily enough, Asus ROG was the example high-end gaming brand cited in HardOCP’s original investigation. So, it appears that Asus ROG has become an Nvidia-only brand, with AMD seemingly having to rebrand its cards.

Of course, there’s no direct mention of the reason behind the rebranding – only the fact that new AMD Radeon brands are launching across GPU manufacturers. So we can expect more of this rebranding to happen in the near future, with MSI and Gigabyte likely to be next in line.

However, ultimately, there’s no reason why these new alternative brands can’t work well for AMD in the longer run. Particularly if the company gets behind them with its promises of openness, transparency, freedom of choice and them having “no anti-gamer/anti-competitive strings attached” – which appears to be the tactic the firm is running with.