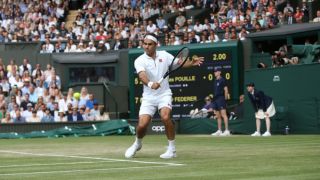 After a fortnight of surprises, sensational semi-finals and the return of Andy Murray, we've finally made it to Wimbledon 2019 finals weekend. Roger Federer and Novak Djokovic are ready to go for glory, inspired by Simona Halep's destruction of Serena Williams. Get out the strawberries and cream and watch all the action with a Wimbledon live stream...no matter where in the world you are.

Live stream Wimbledon 2019 - where and when

The 2019 Wimbledon Championships are taking place from Monday, July 1 to Sunday, July 14 at the famous All England Club in Wimbledon, South West London - SW19, to be precise.

Last year saw Novak Djokovic win the gentlemen's singles title and he remains favourite to take this year's crown after overcoming Roberto Bautista Agut with relative ease. Across from him will be the GOAT Roger Federer - it could be a real classic.

The women's final will be final will be fought out between Serena Williams and Simona Halep - Johanna Konta's loss brought an end to British hopes in the singles in 2019. It should be a cracker, taking place on Saturday.

This is the 133rd Wimbledon Championships and there have been plenty of talking points already at the All England Lawn Tennis Club. Despite homegrown hero Andy Murray not being fit enough to play in the singles this year, he has played some very enjoyable doubles in a formidable team with the awesome Serena Williams.

You can live stream Wimbledon 2019 tennis using the guide below so read on to find out how to get your lawn tennis fix from anywhere in the world.

One of the most prestigious events on the sporting calendar, Wimbledon 2019 is of course being broadcast worldwide with some countries (Australia, New Zealand and, naturally, the UK) getting free Wimbledon live streams. Not so much luck if you're across the Atlantic - sorry US tennis fans.

But if you don't have easy access to watch Wimbledon when away from your country and want to catch all of that geo-blocked domestic coverage, then you can still watch it by downloading and installing a VPN. That way you can login to a server back in your country and then watch as if you were sat in the British Isles.

It's really easy to live stream Wimbledon with a VPN, especially as we've done the hard work for you by reviewing over 100 of the best (and worst) providers to see which one is best. Honestly, it was quite an easy choice to pick out ExpressVPN, thanks to its water-tight security, rapid connection speeds and super easy-to-use interface.

We really like that you can use it on such a vast number of devices, too, with apps on Android, iPhone, iPad, Amazon Fire TV, Apple TV, Roku, PS4, Xbox and more all available. As we say, an easy choice for #1 in our best VPN chart:

1. ExpressVPN:  save 49% on the best all-round VPN for streaming. It comes with 30-day money back guarantee, so you can give it a try without spending a thing. And if you sign up for a whole year, Express will give you three months absolutely FREE!

3. IPVanish: one of the world's fastest and most secure VPN, it supports up to 10 devices per subscription

And don't forget that getting a VPN isn't just a great idea for watching tennis. Your day-to-day online life (think banking and shopping) is made safer with a Virtual Private Network thanks to the anonymous, encrypted tunnels they use. They're great for accessing blocked websites and loads of people use them to access foreign Netflix catalogues, too.

How to live stream Wimbledon 2019 in the UK for free

As always, the BBC has pitched up at the All England Club to bring comprehensive coverage of Wimbledon 2019. Its live action and highlights will be broadcast across BBC One, BBC Two and BBC Red Button from July 1 - 14. Also new for 2019 is the fact that all matches from the 18 courts will be aired in HD by the BBC. Centre court will also get the full UHD 4K treatment too for those that have the TV capable of playing that.

Out and about? As ever, you also have the option to watch via laptop, mobile and tablet on the iPlayer app, completely free.

Also new for 2019 is the fact that all matches from the 18 courts will be aired in HD by the BBC. Centre court will also get the full UHD 4K treatment too for those that have the TV capable of playing that.

Out of the UK during Wimbledon? You'll soon find that the iPlayer coverage is geo-blocked. Annoying, but as we explain above, getting a VPN to virtually relocate to the UK. Once you've installed one and connected to a UK-based server, head over to TVPlayer.com where you'll find all of the UK's Freeview channels in one, robust place.

Live stream Wimbledon for FREE at Wimbledon.com and YouTube

Wimbledon.com is globally live streaming action and that goes for Wimbledon's YouTube channel, too, so handy if you want to watch via an app on your mobile phone or tablet.

The trouble is, assuming Wimbledon 2019 is the same as last year, it doesn't have the rights to show the big action from the show courts - that becomes a particular problem if you're only interested in the top seeds and as the fortnight reaches its climax. We reckon you should stick to the breadth of coverage offered by the BBC if you can.

How to watch Wimbledon 2019: live stream in the US

In the US, you've got a couple of different TV options for catching the action: you can either tune into the Tennis Channel or ESPN. It's worth knowing that both of these are cable-based services so in order to watch you'll need to have a subscription.

Unless you're a cable cutter, in which case you can also access the ESPN Wilmbledon live stream by grabbing a subscription (or free trial) to any of the following TV streaming services:

It's also worth noting that ESPN+ will have additional Wimbledon live stream coverage from the outer courts.

Logging in to the broadcast from overseas is also a great option using a US VPN and following the instructions above.

How to watch tennis from Wimbledon: Australia stream

If you happen to be in Australia and want to follow the next stages of the Barty Party, you're in luck – free-to-air Channel Seven has a Wimbledon live stream. That means you can enjoy it directly through your TV or you can stream it via 7live.com.au on your favourite gadget be it a phone, tablet or computer.

Live coverage will also be on offer from Fox if you're a cable subscriber Down Under. And then there's the new face in sports streaming, Kayo (early rounds live, quarter finals onwards on demand). A Kayo Sports Basic Package costs $25 per month and allows users to stream across two devices simultaneously. Alternatively, the service also offers a Kayo Sports Premium Package, which provides three concurrent streams for $35 per month.

If you try to watch any of that Wimbledon coverage online outside Australia, you'll need to use a VPN.

How to live stream Wimbledon 2019 in Canada

Like in the US, Canada has cable-only viewing of Wimbledon 2019. You'll need to have access to TSN in order to watch. But again, this is a subscription service.

It's good news for those in New Zealand, as free-to-air TVNZ appears to be showing all the action from Wimbledon 2019 once again. It's expected that this will be on the Duke channel.

Additionally, Spark Sport will also be showing matches. It offers a free seven-day trial to get a taste of the new service, and is $19.99 thereafter.

And don't forget that using a VPN will allow you to watch those options even when you're away from New Zealand. So really handy if you're on holiday while Wimbledon 2019 is on.

The annual tournament takes place at the All England Lawn Tennis & Croquet Club in south west London. The venue has held the Wimbledon Tennis Championships - the sport’s oldest tournament - since its inception in 1877. It now attracts an attendance of over 470,000 people over the course of the thirteen-day competition.

How much money do you get if you win Wimbledon?

Since 2007 there’s been parity in what the winners of the Ladies' Singles and the winner of the Gentlemen's Singles each receive –this year’s champions will both receive £2.35 million each.

The men’s and women’s doubles champions will receive £540,000 per pair, while the Mixed Doubles champions receive £116,000 per pair. In total there’s a bumper prize pot of £34million (around $42million) in total prize money to be shared amongst competitors taking part in this year’s Wimbledon Championships.

How many sets are there in Wimbledon tennis?

The Wimbledon Championships are played under Grand Slam tournament rules.

This means that the Men's singles competition uses the best of five sets format, where the player who can clinch three sets first wins the game. For the Women’s singles it’s a best-of-three format, whereby winning two sets ensures victory.

The Men’s doubles, Women’s doubles and mixed doubles also use the best-of-three format at Wimbledon.

Who are the current Wimbledon champions?

The 2018 Ladies' champion was Germany’s Angelique Kerber, who suffered a shock defeat in the second round of this year’s tournament at the hands of the USA’s Lauren Davies.

Who are the favourites for Wimbledon 2019?

Defending Men’s champion Novak Djokovic is the current clear favourite with Betfair with veteran stars Rafael Nadal and Roger Federer nestling in behind.

Meanwhile, seven-time winner Serena Williams is their favourite to be crowned Women’s Champion.

How can I buy Wimbledon tickets? Are they available from Ticketmaster?

If you’re prepared for a very early morning queue – and potentially camping out the night before - there are a limited amount of tickets available for the show courts on a first come, first served basis each day, except for the last four days of the tournament on Centre Court. If you’re happy to settle for just a ground pass and soak up the atmosphere on the lower courts, you’ll need to turn up a few hours before the gates open at 10.30am.

If all that feels like too much hard work, tickets are often available via Ticketmaster with returns and unwanted tickets released on the site on a regular basis during the tournament.