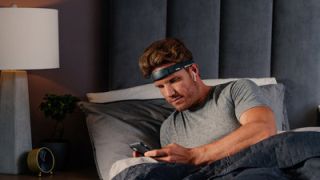 Some wearables are for tracking you at your most active, and others are for helping you relax – a new piece of tech from meditation headband company Muse falls firmly in the latter category, as it's designed to help you sleep as easily as possible.

This new product is the Muse S, following on from the Muse 2 meditation band which was released in early 2019. The product was launched alongside CES 2020, one of the biggest tech trade shows of the year.

The Muse S' main selling point is its 'Go-To-Sleep Journeys' that metaphorically rock you to sleep with a combination of ambient sound, soothing narration and 'real-time biofeedback'. These don't just help you get peaceful enough to meditate, they're designed to get you to sleep.

For more information on what that means, Muse actually released a video outlining how one of these 'Go-To-Sleep Journeys' was made. It's an interesting insight into how these meditative meanders work, and we'd recommend checking it out if you're curious.

As well as these calming campaigns, the Muse S headband monitors your heart rate, brain activity and breathing, so that you can monitor both meditations and sleep sojourns with a variety of metrics. It's designed to be as comfortable as possible, so it won't feel annoying to try to sleep in it.

If this sounds like a great piece of tech for you, there's a catch – the Muse S is pretty pricey. It's available to pre-order from the Muse website in North America, where it'll cost you $349.99 (roughly AU$500) for the headband itself but also $94.99 for a year's subscription to the guided meditations (or $12.99 per month). It'll cost you quite a bit to use this regularly, then.

While the device isn't available elsewhere yet, Muse's website lists prices for certain regions, so we know it'll cost £329.99 in the UK with subscriptions priced at £11.99 per month or £86 for a year. Due to exchange rates (at time of writing) that puts the Muse S as significantly more expensive in the UK. There's no word on Australian pricing yet.

There's no word on when the Muse S will be available outside the US, or when it'll ship in the US (other than 'approx 2 weeks'), but we'll update you when we find out for sure.