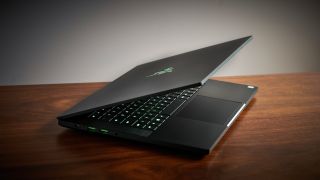 Nvidia is set to launch a clutch of new mobile GPUs, including RTX 2070 and 2080 Super graphics cards to power up gaming laptops, if a fresh rumor is to be believed.

Apparently an inside source within Nvidia spoke to Wccftech and revealed that the new Super mobile GPUs will be out in May, with an unveiling coming at the end of March – or at least that’s when the embargo supposedly lifts.

The source contends (salt shakers at the ready) that there are at least six new notebook graphics cards coming – possibly even more – and they include an RTX 2080 Super with 8GB of GDDR6 RAM, which will replace the current RTX 2080 GPU.

Nvidia will apparently be keeping the cost the same for this more powerful spin on the 2080, and this isn’t the first time we’ve heard the RTX 2080 Super mentioned on the graphics grapevine. It may not, however, turn out to be that much of an upgrade (at least not if it mirrors what happened on the desktop side of things).

There will also be an RTX 2070 Super (again with 8GB of GDDR6) and a plain RTX 2070. As it’s a new GPU, the latter vanilla 2070 will presumably be some kind of higher clocked refresh compared to the existing mobile model.

The RTX 2070 Super will obviously be considerably pepped-up, and priced at around the same level as the current RTX 2070 – presumably indicating that the 2070 refresh will be cheaper.

There is also a new GeForce RTX 2060 coming in to replace the existing RTX 2060, which is seemingly a refresh (presumably higher clocked), although Wccftech theorizes that this could also be a Super variant.

So what about the GTX 1650 Super mobile version which has been previously rumored?

Well according to this inside source, that isn’t happening, but we will be getting two new GPUs at the entry-level.

The new base option will be a GTX 1650 model with 4GB of GDDR6 video memory, which will be an upgrade over the current version which runs with GDDR5. That GPU will replace the GTX 1050 at the low-end, and there will also be a GTX 1650 Ti (with 4GB of GDDR6 video RAM) to take the baton from the current 1650, with a ‘much higher’ core count (the aforementioned speculation reckons it will have 1,024 CUDA cores).

So that’s a pretty major overhaul for Nvidia’s mobile Turing graphics cards, from top to bottom. Apparently the unveiling of these new GPUs will coincide with the launch of Intel’s 10th-gen mobile CPUs (or at least that’s the current plan, according to the rumor).

As ever, we’ll just have to see how this pans out, but those mulling the purchase of a gaming laptop might just be tempted to wait to see if these new graphics cards are indeed set to emerge in just a few months’ time.