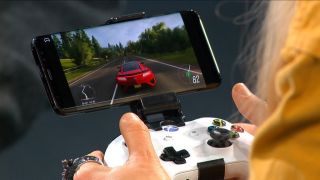 Microsoft is apparently potentially interested in securing some exclusives for its Project xCloud streaming service.

During a roundtable at XO19, Microsoft's Kareem Choudhry said (via Stevivor) that the company is having discussions with first and third-party developers but emphasised that these talks are still in their “early stages” and Microsoft doesn't “have any announcements to share” at the moment.

According to Choudhry, new content and IPs can take around two years to develop so it's likely to be a long while before we hear anything about any potential exclusives. In an interview with TechRadar, Microsoft made it clear that xCloud is very much a "multi-year journey" for the company so it's possible we're talking about years down the line, if at all.

Just now, Microsoft is naturally prioritising getting existing Xbox titles into the Project xCloud preview library and ensuring the service is running smoothly so that users can play the games they want at launch.

During the XO19 show itself, 50 new games were announced for the service which is currently in public preview for Android devices in the US, UK and Korea. Project xCloud is expected to launch on Windows 10 PCs and roll out to more markets sometime in 2020.

If Microsoft did decide to move forward with this idea and secure strong exclusives for its streaming platform, it would certainly make the service an even more compelling proposition and stir up trouble for competitors like Google Stadia. Especially as Microsoft has a leg up on Google in terms of its first party studios with its growing Xbox Game Studios.

At the moment, though, Microsoft's main focus is likely to be on Project Scarlett which is due to launch in late 2020, marking the start of the next console generation alongside the PlayStation 5.