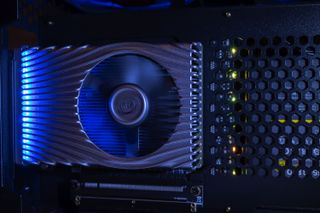 Intel’s DG2, its high-performance discrete Xe graphics cards, will allegedly be built on TSMC’s 7nm process according to a new report, and aren’t expected to launch until 2022.

The report suggests these will effectively be a sequel to DG1 (meaning these will be second-gen Intel GPUs, not just higher-end models).

We’ve been hearing quite a lot about Intel’s incoming graphics cards of late, and indeed at CES 2020, we got to play Destiny 2 on a laptop with Intel’s Xe DG1 mobile (low-power) discrete graphics solution (although it still needs a considerable amount of work).

However, the rumor mill has been pretty quiet on the high-performance DG2 models – the last meaty spillage relating to these happened in July 2019.

In that driver leak, DG2 codenames were present, and the details seemed to indicate that there were three graphics cards which would use 128, 256 and 512 EUs respectively.

Furthermore, AdoredTV recently reported sources claiming that DG2 won’t be out until 2022, and will be a next-gen sequel to DG1 as mentioned.

While AdoredTV sounds very confident in the source of the TSMC rumor, we obviously still have to tread very carefully around how true any of this might be (and indeed, even if it actually is what Intel’s planning now, there’s no telling if any of these plans might change).

At any rate, for the sake of argument let’s assume that this is correct, and Intel is indeed going to use TSMC’s 7nm for a DG2 launch in 2022.

AdoredTV admits himself that this sounds rather crazy, but argues that Intel’s focus with its own 7nm process will be CPUs – which obviously makes sense – although it’s quite possible there will be other Xe high-performance GPUs that could be made by Intel rather than TSMC.

After all, he notes, Intel has promised 7nm Xe GPUs on its own process, although that could of course refer to data center models. At any rate, AdoredTV doesn’t believe that all Xe high-performance graphics solutions will be made at TSMC, but certainly these DG2 models, or that’s the theory.

What about the broader question of why Intel needs to use TSMC at all?

It could simply be a matter of capacity with its own 7nm production, which as mentioned may be prioritized away from GPUs (or at least consumer graphics solutions). Naturally, Intel can’t afford to slip up any more than it already has done with the processor supply chain going forward.

Or alternatively perhaps it’s a matter of cost-effectiveness, which would theoretically be why Intel is going for straight 7nm, rather than TSMC’s 7nm+ EUV process (or it could be a combination of these factors).

Naturally, the worry is that cards built on 7nm – this is what AMD uses for its current Navi offerings – will seem considerably behind the times in 2022. But if Intel is making midrange down to budget cards, and indeed perhaps focusing more on the wallet-friendly aspect of these products, then that won’t matter so much.

In other words, if this is true, we can expect Intel to go in and be highly competitive with the pricing for consumer GPUs – simply because how else will the company get leverage against a market dominated by Nvidia (mainly) and AMD?

This sort of fits in with something else we’ve heard, in terms of Intel making a push on the multi-GPU front. As mentioned, Intel does need something potent to leverage against the dominant players, and that could be not just competitively priced graphics cards, but products which scale up in power with a strong implementation of multi-GPU.

Assuming that can be achieved, of course, but we’ve already seen hints that this is something Intel might be working towards (certainly in terms of getting integrated graphics to help out the GPU, in the case of the PC having both an Intel CPU and graphics card).