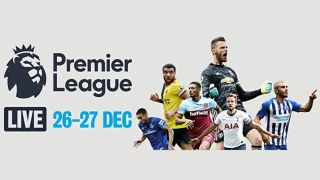 Say goodbye to leftover turkey and family arguments...Premier League football is here courtesy of Amazon Prime Video to make Boxing Day in your home a football-fuelled affair. And we're here to help you find out how to watch every single minute of all 10 fixtures - no matter where in the world you happen to be this Christmas.

What Premier League games can you live stream on Amazon

In a big money move (with an on-message 'undisclosed sum'), Amazon Prime Video swooped in and snapped up some of the 2019-20 season's biggest games. As well as hosting the entire Boxing Day schedule (and a single game on December 27), it also struck gold with Mourinho's return to Old Trafford for Spurs earlier in the month together with a Merseyside derby with plenty of goals.

So how can you live stream Premier League matches on Amazon, when are the games and how do you watch if you happen to be outside the UK when your favourite team kicks off? We'll answer all of those questions (and more) below. Or, if you just want to head over to Amazon Prime and sign up, you can do that right here.

How do I live stream Premier League on Amazon Prime?

To watch all this festive footy goodness you’ll need to be an Amazon Prime subscriber. A year’s subscription costs £79 a year or £7.99 a month.

And Christmas will be coming early if you’re a thrifty sports fan that’s new to Amazon Prime. That’s because Amazon offers a 30-day free trial to those signing up to the service for the first time!

One of the great things about Amazon Prime is the wide array of options for accessing the service - Amazon offer apps across all types of smart devices. If you've got a TV, Blu-ray player or other media player from the last couple of years chances are it'll have the Amazon Prime Video app either pre-installed or available from its app store.

Can I watch Amazon Prime Video from abroad?

Much like Netflix, iPlayer, Disney Plus and pretty much every other TV streaming service, you can expect your viewing pleasure to be curtailed by geo-blocking, That is, you can't watch your usual catalogue of shows and streams when overseas.

So if you’re away from the UK but still want to watch the football on your Prime account, then your best option is to download and install a VPN and then log in to a UK IP address.

We've tested all of the major VPN services and we rate ExpressVPN as the absolute greatest out there. It's compatible with loads of devices (e.g. Amazon Fire TV Stick, Apple TV, Xbox and PS4) and streaming services, ranks amongst the fastest and most secure, and even has an available 30-day money back guarantee so that you can effectively try before you buy. That said, an annual plan currently has 49% off and 3 months extra free which is much better value.

And one of the things we like most about ExpressVPN is the super helpful 24/7 customer service. If you're having any problems at all connecting, they'll be on hand to sort you out over live chat and get you watching in no time from your new corner of the Earth.

What else do I get with Amazon Prime?

Getting access to Amazon’s video streaming service isn’t the only perk of being a Prime member.

The key benefit is unlimited one-day (and for some areas same-day) delivery on millions of eligible items from the Amazon web store.

You also get access to exclusive offers when the likes of Amazon Prime Day and Black Friday (there may still be some Amazon Black Friday deals out there worth grabbing) roll around, as well as unlimited photo storage on Amazon Cloud Drive with Prime Photos and access to Prime Music to stream or download tracks and albums.

And that’s just the tip of an Amazon-sized iceberg – you can check the full list of benefits here.