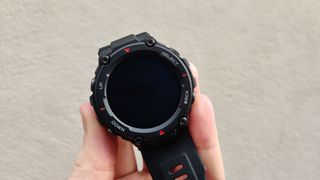 Amazfit has spent the last few months announcing a lot of new smartwatches, and it's not slowing down in 2020 as it has just unveiled the strangely named T-Rex wearable.

The Chinese company debuted the Amazfit T-Rex at its own press conference during CES 2020, and it's is an affordable rugged smartwatch with military grade protection that is designed for adventurers who don't want to spend lots on a top-end device.

Amazfit has given this smartwatch a battery that can last 20 days from a single charge, but it's currently unclear how much usage you'll be able to get out of the watch for it to last that long.

Switch to basic watch mode, and the Amazfit T Rex will apparently last up to 66 days, while continuous GPS usage will see the battery drained in 20 hours.

The watch also comes with GPS onboard, an AMOLED display to view all of your stats and water resistance up to 50 meters. There's a 1.3-inch, 360 x 360 resolution AMOLED display, GPS, compass and it weighs 58g, with the strap. It will be available in five colors, including black, white and army green.

It supports a total of 14 different sports modes, including outdoor skiing and mountain hiking.

The device has four buttons around the outside for navigating around the user interface, and it'll be compatible with both Android and iOS devices.

The Amazfir Bip S was also announced, as a basic smartwatch which will set you back just $69.90. The Bip S release date is set for February.

Th Bip S weighs just 31g and has a 1.28-inch always-on display, which Huami claims is ultra-bright. It's water resistant up to 5ATM, and features GPS, heart tracking, 10 sports modes and a battery life that can last up to 40 days on a single charge.