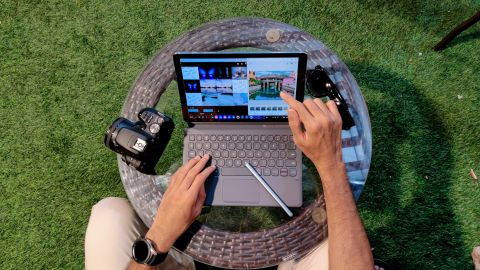 There's no other option in the market for someone looking for a high-end laptop-replacement tablet that is not an iPad. The Samsung Galaxy Tab S6 nails all the pills of a great tablet but is let down by Android's capabilities. Having said that, it is the best iPad Pro competitor on the market and will suit most people's needs.

Tablets are in a weird space right now. On one side, the average screen size in smartphones is big enough to make tablets redundant while affordable laptops and Chromebooks exert pressure from the other side. Understandably, the tablet market has been shrinking over the past few years, and whatever remains is dominated by Apple’s iPads. GlobalStats states that Apple currently holds almost two-thirds of the entire tablet market — a clear monopoly.

It’s no secret that Android manufacturers have given up on tablets for the most part. Google has left the segment, and even LG, HTC, and Sony are slowly exiting the premium segment. Samsung remains the only high-end tablet maker from the Android camp, and the new Galaxy Tab S6 is its best foot forward. It goes against the iPad Pro, which is generally considered the best tab for professionals, and got even better with the onslaught of iPadOS.

Earlier this year, Samsung launched the Tab S5e, which brought a lot of high-end productivity features but was a mid-ranger to its core. It was, however, a step in the right direction. The Tab S6 builds upon all the strong points of its predecessor while learning a bunch of new tricks to make it a more serious laptop-replacement.

Here’s how the Samsung Galaxy Tab S6 fares in this uphill competition.

The Samsung Galaxy Tab S6 launched in India in October, alongside the Watch Active2 and the Watch 4G. It’s priced at Rs 59,900, and comes in Mountain Gray and Cloud Blue colours. The Keyboard Cover can be bought alongside for a price of Rs 5,499.

It is already up for sale, and be bought from Amazon.in or other retailers.

Samsung is known for its good design and build, especially on its high-end offerings, and the Galaxy Tab S6 is the crown jewel of its portfolio. The moment we took it out of the box, we knew this was going to be a special one.

It’s carved out of a single solid chunk of aluminum that adds a premium touch. At 5.7mm, it’s even slimmer than the iPad Pro 11-inch and is considerably lighter too. It feels very sturdy with nice, rounded corners. It can get a little slippery because of the smooth finish but can be gripped easily, thanks to the aptly-sized bezels.

When in the landscape orientation, the power and volume buttons are on the top-left edge, with the pins for the smart keyboard connector are on the opposite side. The S Pen magnetically attaches to the back of the tab and can be easily accessed and put away. However, it’s just a magnetic holding it in place, so be careful of chucking the Tab S6 in your backpack as the stylus is likely to come off. The dual-cameras reside beside the stylus housing.

We highly recommend getting the optional keyboard cover to use the tablet in landscape orientation better and make it a more capable portable work computer. Not just that, the cover also adds an enclosure for the S Pen and covers the entire back and saves it from scratches. It attaches to the back panel with a micro-suction foam adhesive that will look like a big magnet at first glance. Frequent removals are bound to make the adhesive weaker, so attach it once and leave it there.

Samsung’s pedigree in displays is once again seen on the Tab S6 with its 10.5-inch WQHD (2,560 x 1,600) Super AMOLED display, with support for HDR and HDR10+ standards. It’s probably not very different than the one found on the Tab S5e, but that is still a bar set very high.

Thanks to its Super AMOLED construction, you get a vibrant color rendition with high contrast and perfect blacks. Color shift at angles isn’t too bad either. Max brightness levels were also almost always sufficient, only leaving more to be desired while using it outdoors under the direct sun.

Similarly, the lowest brightness levels were great too; however, some jello effect creeps in a while, scrolling through black parts of the display. The image persistence won’t be noticed by everyone, but deserved mention, especially if you plan on using it as a bed-time content consumption device.

For a productivity-focussed device such as the Samsung Galaxy Tab S6, a 16:10 display is not the best choice. It is meant to be used in a landscape orientation, where a 4:3 aspect ratio would have made a lot more sense for vertical content viewing. Comparing it to the iPad Pros mentioned above, it also loses out on the refresh rate, clocking in at just 60Hz.