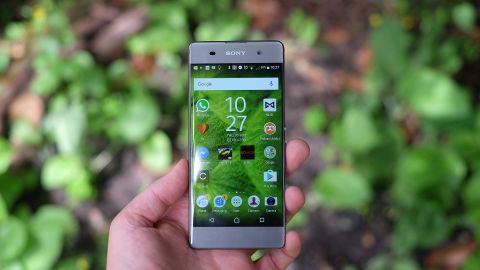 The Sony Xperia XA is slim and pocketable, but problems with performance and battery life mean there are better choices out there.

The Sony Xperia XA is one of the most accessible phones in the X-series line-up with an attractive price tag, slim design and strong selfie camera.

[Update: The Xperia XA price has dropped recently, making it an even better buy, but for those looking for something more recent it's worth noting that it has been succeeded by the equally as afforadable Xperia XA1.]

When it comes to phones, mid-range is the new high-end. Their cameras are already better than the knackered old Canon in the cupboard and you'll often be hard-pressed to notice the difference between a mid-level phone and a top-end one in day-to-day use.

While the Xperia XA may not hit all the high notes, it does offer a solid Android experience at a reasonable price.

That places the XA into a much more attractive budget price bracket, and with its spec sheet and edge-to-edge display it's one of the best looking low-cost smartphones around.

It sees the XA go up against the likes of the Moto G5, Honor 6A and Moto E4 Plus, three other phones offering impressive spec sheets for a low cost.

The Sony Xperia XA has a design emerging as a common standard for mid-price phones out to avoid feeling cheap. It's a mostly-plastic device, with some bits of metal tacked-on.

There's a slight act of self-deception involved here. The idea is that because the sides of the Xperia XA are metal, you get some of that high-end feel while only using about 10 per cent of the more expensive materials.

Guess what: you do. While it's nowhere near as nice-feeling as a OnePlus 3 (not even close), the logic makes sense. Put the fancy-feeling bits by your fingertips, the most sensitive parts of your hands.

To get specific, only the left and right sides are aluminum. The top, the bottom and the back of the Xperia XA are all-plastic.

The other fancy part is the curved glass on top of the display. You'll often see this referred to as 2.5D glass, meaning its edges are rounded-off. It's not flat-out curved like the Samsung Galaxy S7 Edge. It softens the feel, but must come at barely any premium at all given how many cheaper phones use this glass.

Sony's burning of the Xperia Z branding with the new X range may make you think there are grand changes in this year's Sony phones, but there aren't. The Sony Xperia XA is formed of compacted Z-series ashes.

It's very slim, and has what Sony used to call an OmniBalance setup where the power button sits almost in the middle of the phone's side.

Of course, many manufacturers do this nowadays so the obvious difference is that the Xperia XA has a round power button.

Among Xperia phones, what's neat about the Xperia XA is that its left/right screen surrounds are very, very skinny. In the past I've complained about Xperias being frankly not that nice to hold because of, variously, boxy designs, sharp seams and dimensions that come across better on paper than in person.

There are no such issues here, though.

Sure, it'd feel much skinnier if the shape wasn't essentially still a rectangular box, but the Sony Xperia XA is easy to handle.

Like most mid-range-and-higher phones these days, the Xperia XA has a non-removable back with a non-accessible battery. There's a flap on the side that covers the microSD and nanoSIM slots.

Unlike the Sony Xperia Z5, there's no rubber seal on this flap so, whatever you do, don't drop the Xperia XA down the toilet, in your pint glass, etc. Sony has largely backed away from big waterproofing claims in its phones anyway, after one too many people found that their water resistance was less than infallible.

There aren't too many higher-end hardware extras either. There's no fingerprint scanner, for example, the latest "must-have" among ambitious mid-range designers like Honor, Motorola and OnePlus.

Next Page Screen and software