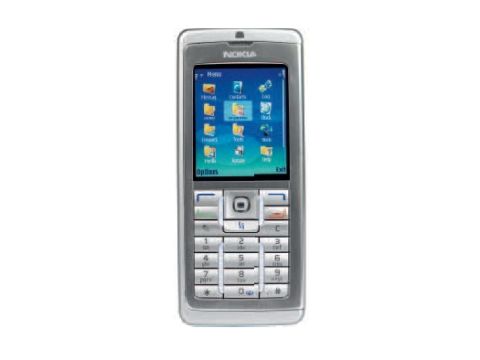 It's not a looker, but business users will love it.

Nokia's new range of E-series (E for Enterprise, that is) business phones are very much aimed at the corporate market, and many of their impressive features are designed to be utilised in association with a company's IT strategy, accessing Wi-Fi networks and 3G and having the firmware to support various push email protocols (but without having each of them installed).

Of all the E-series, this is the one that screams 'business phone!' loudest. No quirky Qwerty keyboard solutions, just a matter-of-fact layout in shiny silver, the only hint of individuality being its slightly elongated length and the metal stripe down the sides.

It's one up from the lower end of the range (the more petite and lesser specced E50) but it still comes with Symbian smartphone functionality under the skin.

It's a sleek, business-like product all right, with a screen that's big enough for viewing documents or browsing the web, but with an unfussy candy bar form factor and bevelled edges that allow it to slip very invitingly into your suit pocket.

The keypad is hardly a thing of beauty, but its large, slightly raised keys are easy to use and offer a reassuring degree of resistance. A couple of little plastic dividers separating the three rows of keys help to avoid misdials. The joystick too is responsive and comfortable to use.

There's a dedicated voice notes button on the side, as well as volume controls, and while you might miss the Qwerty keyboard offered by the E60's bigger brothers, it is compatible with Nokia's rather nifty fold-up Wireless Keyboard, with which it can connect via Bluetooth. As well as Bluetooth it's nice to see an infrared port too, which seemed to have all but disappeared from Nokia phones until recently. It may not be able to match the data rate, but for convenient quick data swapping without the need for pairing, it's hard to beat.

Like the others in the E-series range, the ultimate specs of the E60 are expected to be decided by the IT department of businesses. There is a staggering array of options, such as push email, Wi-Fi (Wi-Fi 802.11g, e and i) offering the potential for free or low-cost VoIP calls via the internet, corporate email applications and some pretty nifty remote security options, which include the ability to lock it or wipe it clean of data. None of these however, are particularly easy for the average user to set up.

There's no camera onboard the E60, not because it's a cheap handset, but simply because many companies don't want them on their employees' mobiles. As cameras on phones improve, they're increasingly seen as a security risk, and even if your own firm is cool about the use of cameraphones on site, some of their partners may not be. Of course this also means that you won't be able to use the E60's 3G connection for video calling.

The 16 million colour screen looks fantastic - bright and clear, not that you're likely to be viewing many photos or videos on it (although you can if you receive pics as messages or download videos or images). The screen's shape is on the thin side, but there's a neat trick that allows you to rotate the screen by 90 degrees so you can view in widescreen mode, which could come in useful for some presentations. It only turns one way though - left-handers would have welcomed an alternate rotation angle.

There's plenty of room for data onboard, whether it be Microsoft Office documents, video (from other sources, obviously) or music - 64MB of memory, to be precise. This can also be expanded via Reduced Size Dual Voltage MMC memory cards, which slide into a covered slot on the side, without the need to remove the battery. A 64MB RS-MMC card is supplied as standard in the pack

To further underline the E60's business credentials, it comes with a mono headset - when was the last time you saw one of those on a mid to high-end phone? There's a music player onboard capable of supporting MP3 and AAC tracks - but you'll have to get yourself a stereo headset to appreciate it. It'll have to be a Nokia one though, since it needs to plug into the phone's Pop-Port interface.

Incidentally, Symbian OS 9.1 allows you to do some other pretty clever things too. Previous versions wouldn't let you take a call and browse the net at the same time for instance. But now you can, and indeed, you can have up to six wireless connections operating at once, including Bluetooth and infrared. There's also a facility that allows you to add DRM (Digital Rights Management) to your own documents, so that you can send them to colleagues safe in the knowledge that they can't then send them anywhere else.

There's also a Voice Aid function which speaks the menu selections for you - handy if you have impaired vision, or enjoy using your phone with your eyes shut. As far as games are concerned , the E60 supports both Java and Symbian applications, including multiplayer gaming, and Pro Tour Golf should be included as standard (it wasn't available on our review sample). Other Java apps onboard included a Converter (measurements, currencies etc) and World Clock.

Nokia has had the battery situation licked for quite some time. But the demands of feature-heavy smart phones do make a dent. Despite a claim for 12 days on standby, ours puttered out midway through the third, and that was after only fairly mild usage of Wi-Fi and 3G connectivity plus using other functions.

In use, the phone's Symbian S60 OS 9.1 seemed fairly nippy - noticeably faster than the E70 for instance, which uses the same system

It might not be an eye-catcher, but Nokia has clearly thought very carefully about what a modern business needs from a phone and thrown it all into the E-series. The E60 may not have a quirky Qwerty keyboard, or even a camera, but its clean lines, forward-thinking features and practical layout could see it becoming the next omnipresent business phone, doled out by IT managers across the land like previous Nokia workhorses such as the 6310 or the 6230. You might not buy it, but if you're a business person this could well be your next phone. Dave Oliver

Style: The E60 is all business, with its straightforward silver finish and no-nonsense block shape

Keypad: The big, raised buttons are separated by a little plastic divider which helps to minimise misdials

Screen: 16 million colours and gloriously sharp - shame there's no camera so you can show off your pics with it