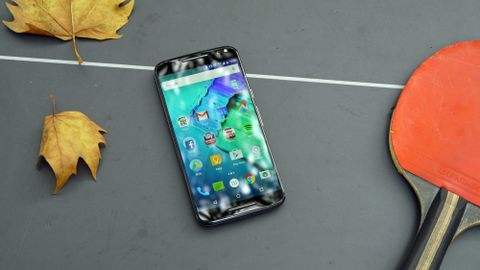 It's not a handset with universal appeal, but for those looking for a big screen flagship at a decent price the X Style is an excellent option.

The Motorola Moto X Style arrived as part of a duo earlier this year, with the Moto X Play sliding in below the flagship X Style.

It sports flagships specs and a pure Android experience, as Motorola looks to mix it up with big boys at the top end of the market.

In the US the Moto X Style is known as the Moto X Pure Edition, but aside from the name it's the same phone.

SIM free prices start at US$399.99 (around AU$545) for the 16GB Moto X Pure Edition (which isn't available in the UK), and you can head over to the firm's Moto Maker website to personalise your handset.

You can select an accent colour for the metal bar around the camera on the rear, and the speaker grills on the front, plus there's an option to have your name, or a message, engraved on the rear.

Motorola really wants you to make this phone yours, but if you walk into a retailer you won't get such options - black, champagne and white will be the only options that greet you.

It is priced comfortably lower than its rival 2015 flagships however, although it's a little pricier than the disruptive OnePlus 2.

With a 5.7-inch QHD display, hexa-core processor, 3GB of RAM and a 21MP rear camera the Moto X Style sounds like a pretty good deal - but has Motorola been able to deliver? Let's find out.

OK, there's no getting around this - the Moto X Style is a bit of a beast. The sizable screen size is your first warning that this won't be a small handset and that's confirmed by its 153.9 x 76.2 x 11.1mm vital statistics.

That 11.1mm thickness is pretty noticeable too, especially when many smartphones now rock a sub-10mm girth, with the likes of Samsung, Sony and Apple boasting flagship handsets at less than 8mm.

The slightly curved rear allows the Moto X Style to sit a little more snugly in the palm than the Galaxy S6 or iPhone 6S, and the soft touch rubberised back on my review unit provide a decent level of grip.

It's one of the weightier handsets on the market too - unsurprisingly considering its size - and at 179g you'll certainly notice it in your hand and pocket.

Motorola's done well putting the X Style together, with the metal frame running round the circumference of the phone providing a sturdy finish and a slightly premium look.

It's not in the same league as the Samsung Galaxy S6 Edge+, iPhone 6S Plus or Samsung Galaxy Note 5, with these devices offering far more premium finishes, not to mention thinner, lighter bodies.

They are more expensive though, and considering the X Style's price it's still a well put together device.

The dual front facing speakers do mean it's a little bezel heavy front-on, but you do get improved audio so it's not all bad news.

The power/lock and volume rocker keys are located towards the middle of the right side of the X Style, falling nicely under thumb and finger.

Up top a centralised headphone jack is joined by a tray which can hold both your nanoSIM and microSD card. It's a nifty dual-sided affair and a nice little bit of engineering from the Motorola team.

Motorola has used advanced nano-coating technology to form a water repellent barrier on the Moto X Style, but don't go jumping in the bath with it. As Moto states, this coating protects against "moderate exposure to water such as accidental spills, splashes, or light rain."

It's not quite Sony Xperia Z5 levels of water resistant, but it's definitely welcome.

If you're looking for something a little more durable, there's a new choice from Motorola. Since releasing the Moto X Style, the company has also shared the Moto X Force which is designed to survive most drops and not break easily.

In the US it's called the Moto Droid Turbo 2 and considering it's one of the most durable phones on the market right now, it is actually quite well designed.

Those with smaller hands will find the Moto X Style a bit much in the palm, and even I had to employ both hands a lot of the time to ensure the handset didn't hit the deck.

But if you're looking for a well designed, big screened smartphone without a flagship price tag the Moto X Style certainly offers a compelling argument.

The Moto X Style sports a great screen, but it's also a big one. At 5.7 inches the X Style will simply be too big for many. The Moto X Play is slightly smaller at 5.5 inches if you fancy something a little more manageable in hand.

With a QHD resolution of 1440 x 2560 the X Style's screen is crisp and sharp. Motorola has opted for an IPS LCD panel which means colours aren't quite as vibrant as its AMOLED rivals, but it still looks excellent.

There's no cut and dry auto-brightness setting on here, rather an "adaptive brightness" toggle which does a similar job, but is less extreme. That's fine most of the time, but I did find at night the screen on the Moto X Style could be unnecessarily bright. A waste of precious battery life.