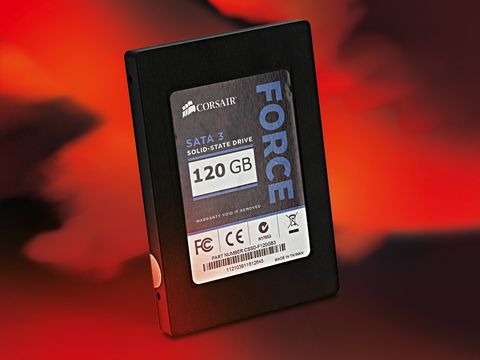 Seriously cheap for a 120GB SandForce 6Gbps drive, but a little rough around the edges

One hundred and seventy English pounds for a 120GB SSD powered by the latest SandForce SF-2200 controller and 25nm NAND flash memory? Looks like a bit of a bargain, particularly compared to 120GB-ish drives with the Marvell 9174 controller, such as the Intel 510 and Plextor M2S.

For the most part, Corsair's new Force 3 continues to look like a great deal when the stick-poking forensics kick off. You get the same SF-2281 controller found in several much more expensive drives. That means SATA 6Gbps support and clever DuraWrite data compression that reduces traffic to the flash memory cells, theoretically making for more performance and better drive longevity.

In fact, to be strictly accurate, data compression is just one part of the DuraWrite feature set that contributes to reduced write amplification. To give an example of the overall impact, SandForce says a typical installation of Windows 7 and Office 2007 involves 25GB of writes to a standard hard disk or SSD. Thanks to DuraWrite, this is reduced to just 11GB.

Due to the way data is stored in blocks, with a normal SSD you'd expect much more than 25GB of data to be written to the flash cells, hence the term 'write amplification'. With that in mind, the arrival of 25nm MLC NAND flash from Intel and Micron, as found in the new Force 3 and several other drives, is intriguing.

Depending on who is doing the measuring, 25nm NAND is rated at 3,000 to 5,000 write-erase cycles. At best, that's half the typical rating of 34nm NAND and raises questions about just how long the latest SSDs with 25nm NAND can last. It will likely take years for a really detailed picture of the reliability of today's SSDs to emerge. But anything that reduces writes must be a good thing.

What the Force 3 isn't, however, is perfect. For starters, Corsair has gone for cheaper asynchronous NAND, limiting absolute bandwidth (not taking into account data compression) to 50MB/s channel or 400MB/s total. Just like the OCZ Agility 3, which also uses asynchronous NAND, the Force's 3 claimed sequential performance is likely to drop significantly when handling incompressible data.

Another problem is likely temporary but concerns drives freezing or not being detected by the BIOS for certain motherboard chipsets; most often Intel Z68 and H67. As we went to press, the problem wasn't solved, but Corsair has been extremely candid so far and we're confident it will solve the issue.

The final snag is performance that's good but not great. Some of the shortfall can be explained by the asynchronous NAND chips. But overall, the Force 3 is a little slower than we expected. Whether this is related to the drive's current instability is unclear. We hope to know in the coming weeks.